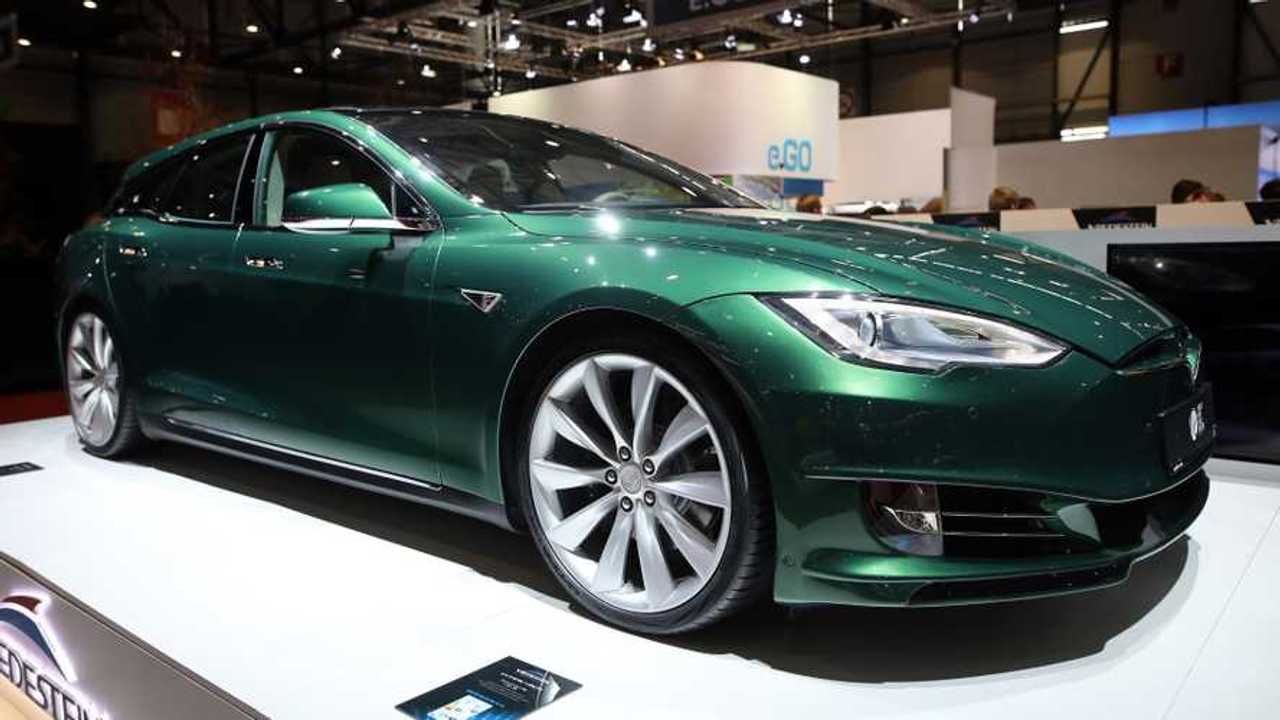 Model SB is the brainchild of a Dutch car enthusiast and a London-based designer.

An Anglo-Dutch coachbuilding company is currently showing off a Tesla Model S-based shooting brake at the Geneva Motor Show.

Tesla does an about-face by raising prices, keeping stores open

The dark green estate car is the work of Dutch designer Niels van Roij, who runs a design company in London. At the request of a car collector in Holland, he and his team created an estate version of Tesla’s famous electric executive saloon.

Cleverly named the Model SB, it has much the same mechanical underpinnings as a normal Model S, but van Roij has grafted a hatchback tail on to the original car’s aluminium bodywork. The main structure and crumple zones are completely intact, although the silhouette has changed dramatically.

Niels van Roij Design created an entirely new tailgate for the car, fitting a rear spoiler and a hidden windscreen wiper, as well as adding a thick band of chrome trim to the flanks and roof. Running up the roofline from the door mirror to the D-pillar and back along the waistline, then up the sides of the windscreen and around the panoramic roof, van Roij says the addition gives the car a “bold” stance when viewed from the front.

Floris de Raadt, the shooting brake collector and long-time electric car driver said the Model SB was designed to be aesthetically pleasing, rather than simply a more practical Tesla.

“The idea was to translate my Tesla Model S into a dynamic and sporty yet elegant shooting brake, rather than creating a car with maximum luggage space,” he said. “Niels van Roij Design developed several options for the conversion, focusing on premium design combined with limited conversion costs: thus making coach building available for a larger group of connoisseurs. Our favourite was the option called ‘Bold Chrome’, featuring remarkable high gloss chrome window trims emphasizing the bold dynamic lines of the car. The result is truly stunning!”

Van Roij, meanwhile, said the company had made a huge effort to ensure the design was exactly right.

“Design is the most important reason for purchase globally – regardless of the purchase price, gender or age of the buyer,” he said. “So we’ve invested a lot of time in the design process of our shooting brake. We started with writing the design strategy, after which the design research was initiated, then sketching began. The aesthetics of this conversion have been developed thoroughly by producing three design propositions, within which 16 different design themes were generated. Our research focused on benchmarking high end performance estate cars, one-off vehicles and market trends.”