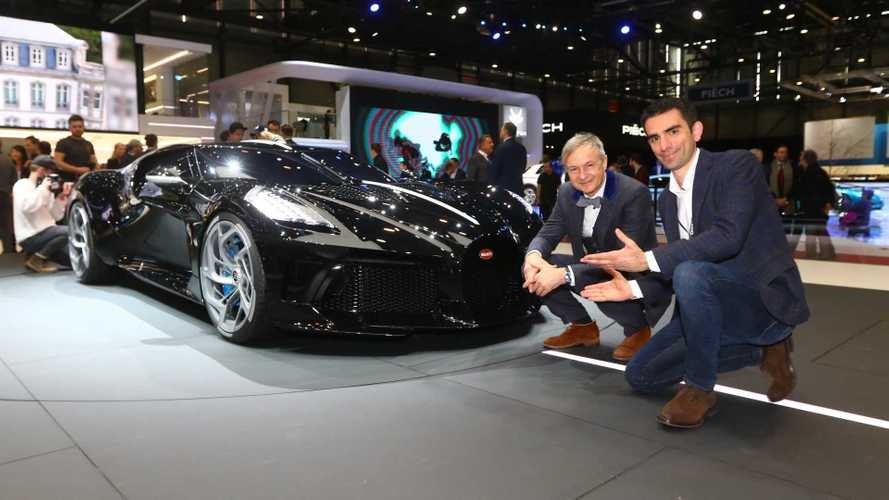 Achim Anscheidt says the hardest thing about designing a Bugatti is balancing the thermal management and the desired design.

Being the design director at Bugatti is among the greatest jobs possible in the auto industry. Achim Anscheidt, the brand's styling leader, knows that he holds a very special position and does nothing to hide it. "Still today I pinch myself to see if all this is real," he said in an interview with Motor1.com's Italian edition during the 2019 Geneva Motor Show. Anscheidt sat down with us to discuss creating the one-off Bugatti La Voiture Noire.

What does is it mean to create something that it is so special when you already work for such an exclusive brand?

First I pinch myself if this is really now happening. We have been wishing and hoping for this project for more than 10 years.

The design was not finished 10 years ago, but the idea to create a story around the missing Atlantic has been in our brain for a long time and I didn't get a chance to really execute this until this very day. Now the opportunity came around with a strategy of using the Chiron, which is limited already, and then for the Divo up to one car only for one customer, which is sort of five hundred cars, forty cars, one car. And it is a haute couture strategy that we are following here.

Take a closer look at the La Voiture Noire:

What is the most complicated thing on a project like this?

The biggest challenge with the Bugatti project always is to create a win-win solution with an engineering development. The powerplant and the drivetrain of a Chiron is so complicated in terms of temperature development that you are not going anywhere as a designer if you are just trying to do a nice line or something nice. Your engineers say no, no, no, no, this will decrease the performance or will get us in trouble temperature-wise. So to understand the creation of win-win situations with the technical department is always the biggest challenge for a Bugatti designer and for all the designers that are on my team. And then to get to either this statement, or this statement still is the execution where I'm out directing the overall concept. Here a concept of elegance, proportion, style, and ultimate luxury.

Is there something unique in terms of design that your team applied to technology that we can see because we know that with Bugatti normally there is always something very, very special. Can you point out something?

As I started to explain already one of the biggest challenges for a Bugatti design is temperature-handling. This is true already on the Chiron and I know from my engineers, they even want to have more available room to release hot air from the engine compartment. So we did something for elegance to introduce a perforated structure there, and they said, 'Well temperature wise that is not really ideal.' So I had to offer them more room here in the back compared to the Chiron and move the tail light up and actually extract hot air from here, from here, from here and also here, and actually all around the license plate. When you compare it to the Chiron we're releasing more air from them. So I think it's a very different solution from the Chiron – it's almost like a romantic, single beam tail light that this car has in a more elegant execution but at the same time it offers us better cooling performance on this project.

What about the name, Voiture Noire – is it because of the historic model?

Because of the missing car actually. You know there were four Atlantics built, but only three survived. Actually, only two really survived – one got completely trashed with an accident and was rebuilt more or less like a replica, I have to say. But even that car is worth more than 10 million today, just because the theme and the subject of Atlantic is such a strong one in the history of Bugatti and in automotive history. But the fourth car was Jean Bugatti's personal car in wartime. Only he was supposed to drive them and his friends, the Grand Prix pilots, they were allowed to drive this car.

Final question. What's next? Another challenge? Can you say something about this?

This year, the whole year we will be celebrating 110 years. So I think we should be busy with other celebrations maybe during the year. But this year is unique you know? Like 2009 was unique when we celebrated our centenary. We're celebrating this year together with Stephen Winkelman, our new president, to do something special this year.