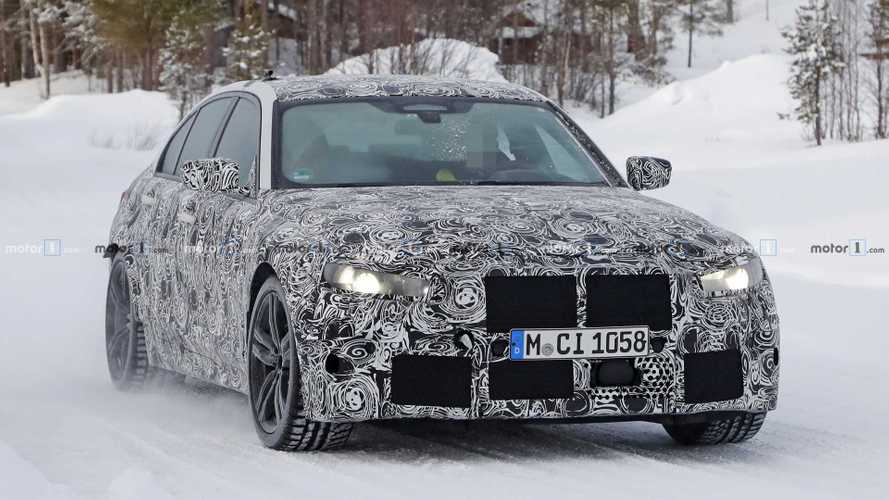 There's something interesting going on with the rear wheel arches.

After the launch of the regular 3 Series Saloon versions and the warm M340i, it’s only natural BMW enthusiasts are patiently waiting for the new M3 to break cover. Latest intel suggests the official reveal is scheduled for September, presumably at the Frankfurt Motor Show, but nothing is official at this point. As these new spy shots show, the Bavarians are still hard at work preparing the fully fledged M version of the iconic sports saloon.

Clad in camouflage but showing off its quad exhaust tips, the new M3 must have had the production-spec bumper considering there’s some heavy disguise up front. Those headlights are unlikely to be the ones you’ll find on the road-going model, which is usually a sign the reveal won’t take place in the near future.

Perhaps the most interesting detail we’re able to observe is at the wheel arches where BMW has installed some extensions likely serving as a clue the new M3 will have a wider track. These add-on pieces are more noticeable at the back where the test vehicle might not have had the production-spec quarter panels. Blue callipers for those chunky brakes on all four corners are telltale signs this isn’t an ordinary 3 Series.

Several reports indicate BMW has plans for a trio of M3 versions, starting off with a so-called Pure flavour with 444 bhp on tap, a rear-wheel-drive layout, and a six-speed manual gearbox. The midrange M3 will allegedly feature 475 bhp, an automatic transmission, and all-wheel drive. As for the flagship M3 Competition, this too would have an automatic and xDrive, but with output lifted to 500 bhp.

There's no shortage of M3 reports:

Next BMW M3 packs up to 500 bhp, insider claims

Regardless of the one you go for, the rumour mill indicates all three M3 models are going to pack an adaptive suspension and a limited-slip differential as standard. The Competition is expected to feature carbon-ceramic brakes as well, which could be offered for the lesser models as an option.

If the September public debut is legit, we might get to see the new BMW M3 online as early as August. Even if it will go official later this year, insiders are claiming production won’t start until 2020.