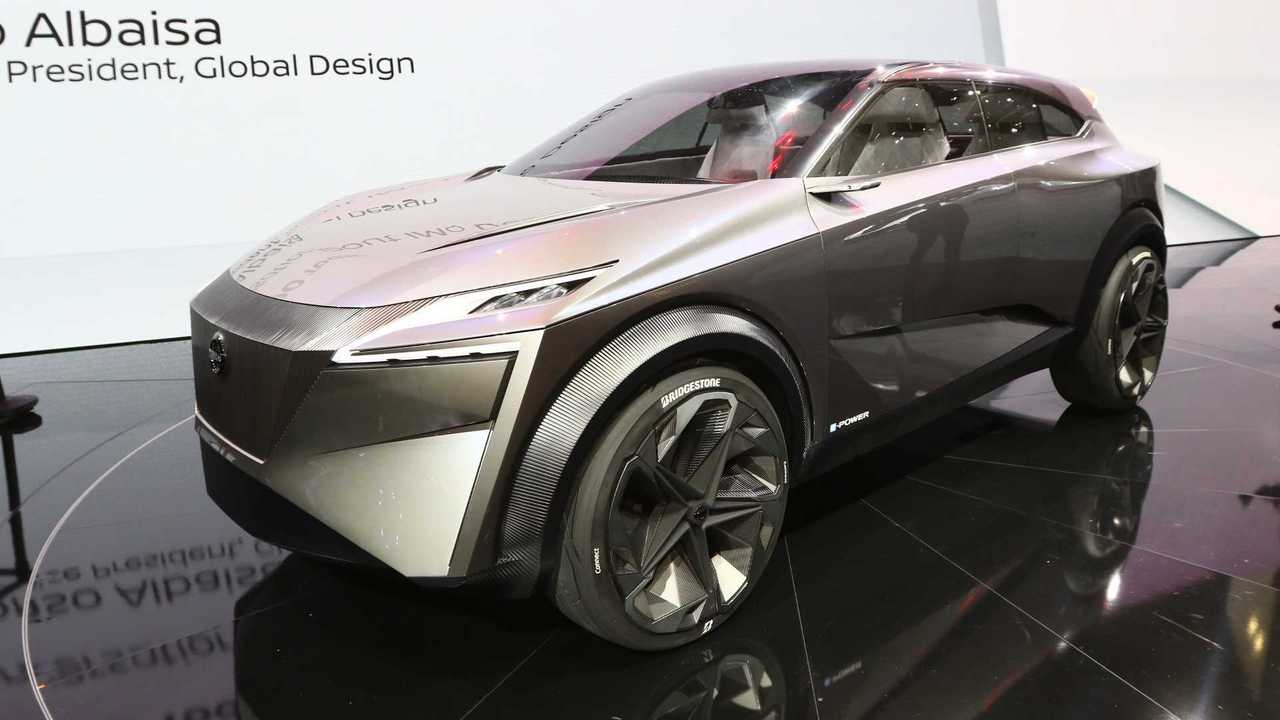 Dubbed the IMQ, Nissan says the newcomer “signals the direction” for the brand’s future crossover design and technology.

Draped in a new design language, the IMQ contrasts the smooth surfaces of the ‘glasshouse’ and upper bodywork with the angular lines lower down. There’s also a new iteration of Nissan’s V-motion grille feature, which is far more subtle than on the Qashqai, Micra and GT-R.

But despite the origami body panels, though, the IMQ has a vaguely familiar silhouette. The dimensions are broadly similar to those of a family SUV such as the Kia Sportage or Volkswagen Tiguan, although the roofline is a little more swooping and Evoque-esque.

However, the interior is a little less conventional, with ‘suicide’ rear doors and more familiar front doors opening to reveal a clean, unfussy cabin. Nissan describes the IMQ interior as “spacious” and “futuristic”, with its driver-focused dashboard, squared-off steering wheel and buttonless dashboard. The seats are slim and heavily sculpted, and finished in two-tone fabric that has been laser-etched with a 3D design that’s replicated elsewhere in the cabin.

In front of the driver, there’s a simple 840 mm digital instrument display, while a smaller screen in the centre console houses the car’s virtual assistant. Responding to commands from the driver, the system can control vehicle functions such as navigation and multimedia.

And that’s not the only clever technology on show. The IMQ also comes with Nissan’s prototype ProPilot autonomous driving system, as well as the brand’s Invisible-to-Visible tech. Revealed at the Consumer Electronics Show (CES) earlier this year, the augmented reality system allows drivers to ‘see’ around corners and visualise traffic information. The system will even give you a virtual passenger if you’re lonely.

There’s tech under the skin, too, with the new e-Power electric powertrain providing a considerable 335 bhp. It serves up 516 lb-ft of torque, too, which is sent to all four wheels through a new multi-motor all-wheel-drive system. Controlling each wheel independently, it is designed to give the IMQ strong low-traction capability.

“The IMQ’s design combines traditional and modern Japanese influences and shows what’s possible when future crossovers are powered by Nissan Intelligent Mobility,” said Alfonso Albaisa, senior vice-president for design at Nissan. “With the IMQ, the interior and exterior are seamlessly blended together, signalling what our design direction may be for Nissan’s third generation of crossovers in Europe.”