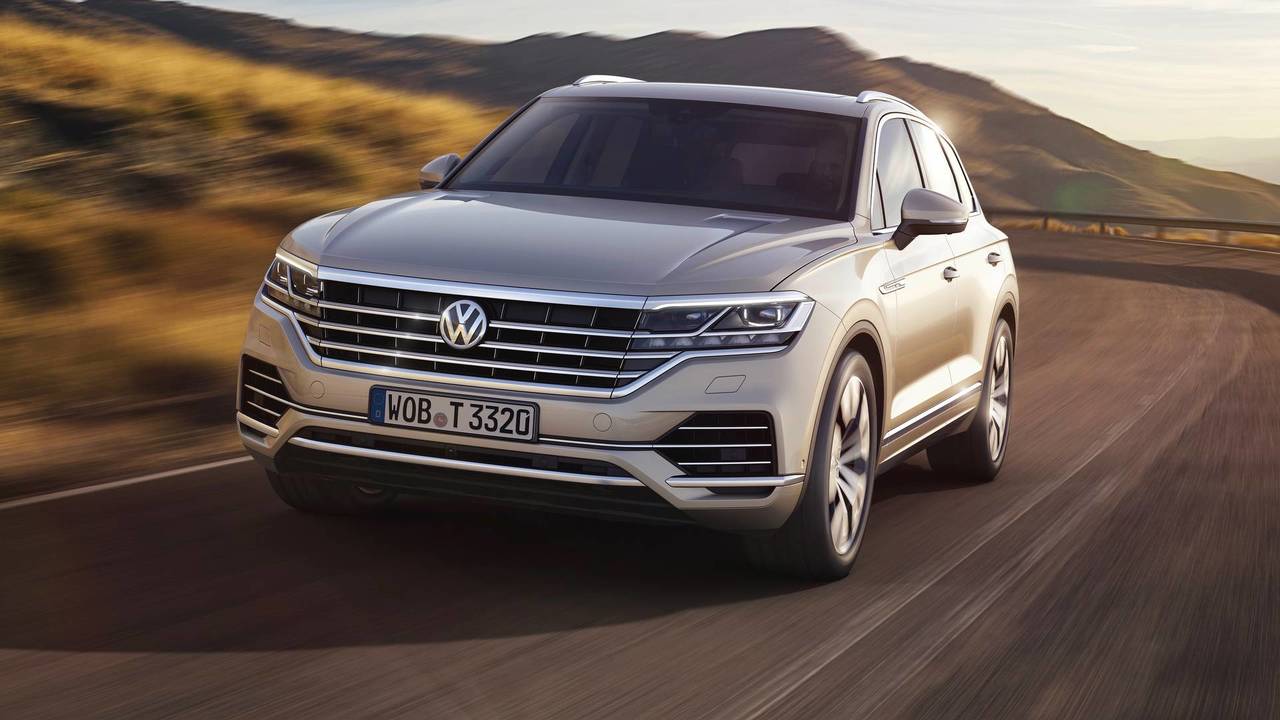 More on the third-generation VW Touareg:

The German 4x4 has, up to now, exclusively featured V6 turbodiesel power, with two versions of the same 3-litre engine on offer. However, the newcomer offers a more potent, lighter alternative to the existing 228 bhp and 282 bhp diesel variants.

Like the diesels, the petrol engine is a 3-litre turbocharged V6 unit, which sends its power to the wheels via an eight-speed automatic gearbox and Volkswagen’s 4Motion all-wheel-drive system. However, because the petrol engine weighs less than the diesel versions, it shaves 50 kg from the Touareg’s kerb weight - a saving that should, theoretically, improve economy, handling and performance.

Even so, the petrol Touareg tips the scales at a little over two tonnes, but the 335 bhp and 332 lb-ft of torque produced by the engine take it from 0-62 mph in 5.9 seconds. Add in a 155 mph top speed, and the new version comes out as the fastest model in the range. And despite that, it still boasts the same 3.5-tonne towing capacity of its diesel-powered siblings.

Unsurprisingly, though, it’s less economical. Officially, the petrol Touareg will return 31.7 mpg, while emitting CO2 at a rate of 203 grams per kilometre travelled, whereas the diesels manage 173 g/km. It’s also the most expensive variant, with an asking price of £52,635 in its cheapest guise. Compared with the diesels, it commands a premium of £3,500 over the 228 bhp car and just under £1,000 over the more powerful 282 bhp version.

If you want the top-of-the-range R-Line Tech version, though, you’re going to have to dig even deeper into your bank account. Prices start at £55,695 for the cheaper of the two diesels, but the petrol comes in at more than £59,000 - and that’s before you’ve so much as glanced at the options list.

And you’ll have to wait a little while for the car to arrive. Although the new petrol version is already on sale, the first customer cars aren’t expected to arrive in the UK until at least April.

Volkswagen UK’s Touareg product manager, Brian Luckie, said the new engine would make sure every customer was catered for.

“The addition of a powerful petrol engine to the Touareg range now gives customers three options – the choice between one petrol and two diesel units ensures that there’s a Touareg for all customers,” he said. “Being available in the same technology-packed specs as the existing range means that the Touareg’s long list of talents now includes the flexibility of being available in both petrol and diesel forms throughout the line-up.”