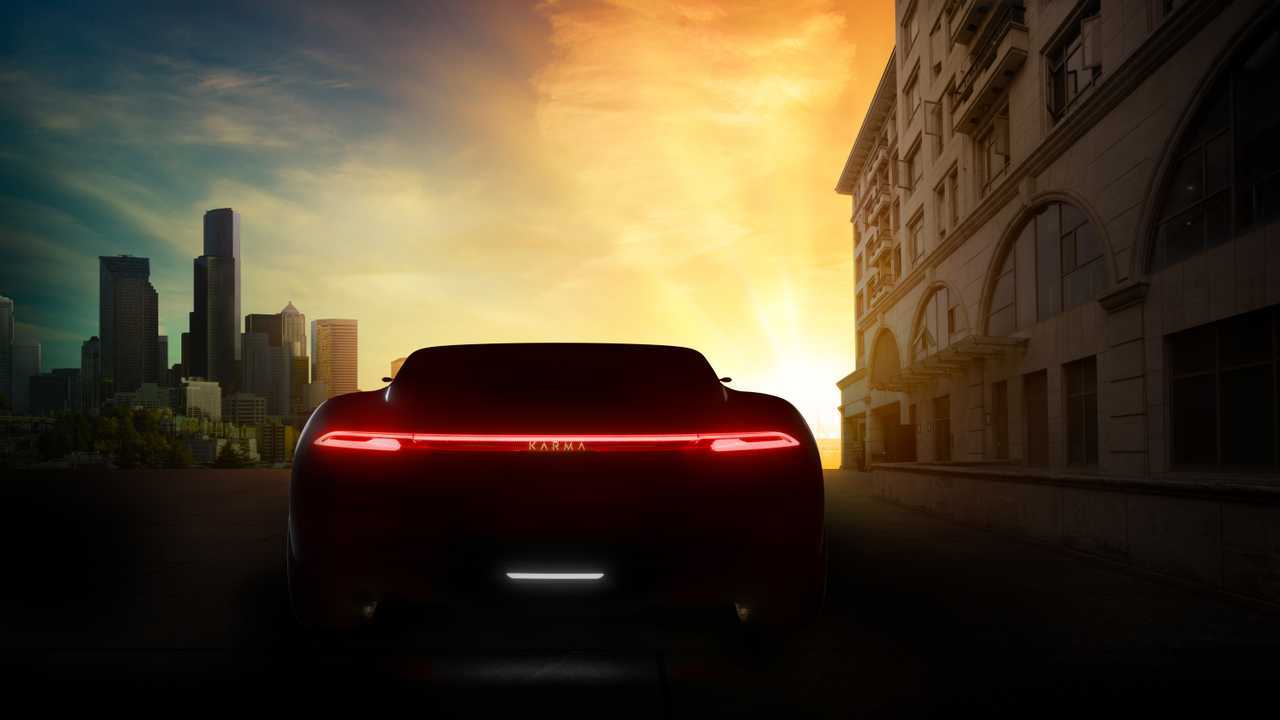 The electric automaker will also reveal the next-generation Revero and a new project with Pininfarina.

The 2019 Geneva Motor Show is in full swing, but already Karma Automotive is looking towards Auto Shanghai in April. The electric automaker is planning to reveal its next-generation Revero saloon at the Far East show, along with two other new products including a concept called Vision, featured in the teaser photo above. The offerings are part of a larger initiative dubbed the company’s “New Dawn,” signifying both new products and a new plan for Karma’s near and long-term future.

“Karma is a luxury automaker but we are not just a luxury automaker,” said Karma CEO Lance Zhou. “Taken together, Karma’s Shanghai Big Three represents our transformation from an old-value car manufacturer to a company building long-term value in part by becoming an open platform luxury high-tech automotive incubator.”

In this instance, big three stands for the three vehicles Karma plans to reveal. We already know about the next-generation Revero electric saloon, which continues to share a resemblance to the Fisker Karma of old. We don’t have any details about the new car, other than Karma plans to have it on sale in the second half of 2019. The company has a small-but-growing network of dealerships and Karma-owned stores in the U.S., Canada, and Chile.

The second car is the Vision concept, seen for the first time at the top of the page. The teaser gives us a shaded look at the concept’s backside, revealing wide haunches with an extremely low roof. Karma offers no information as to the nature of this concept, but if the photo is any indication it appears to not be an SUV or crossover.

The third vehicle is a complete mystery, with one exception. Whatever it is, Karma partnered with Pininfarina to make it happen. Whether that means additional luxury electric vehicles from Karma will feature Pininfarina styling is something we’ll have to wait and see, but in its press release, the automaker did make several mentions of having strong partnerships going forward.

A NEW DAWN AT KARMA AUTOMOTIVE:
SHANGHAI TO HOST DEBUT OF FUTURE DIRECTION

A new generation luxury electric Revero, the first results of a partnership with Pininfarina
and an all-electric Karma Vision concept will comprise Karma’s “Shanghai Big Three”
product announcement at the global auto show schedule for mid-April.

Since its beginnings in 2014, Karma has quietly built a fully-operational enterprise and
value chain of nearly 1,000 employees working from its headquarters in Irvine, Calif.,
Karma’s Innovation and Customization Center in Moreno Valley, Calif., Detroit Technical
Center, in Troy, Mich., and a campus in Hangzhou, China. Now, as outlined by Karma
CEO Dr. Lance Zhou, the company is ready to reveal the details of its long-term business
strategy and product plan.

“Karma is a luxury automaker but we are not just a luxury automaker,” Zhou told those
attending “Bridging Detroit and Silicon Valley,” an industry briefing sponsored by the
Center for Automotive Research at the SAP Campus in Palo Alto, Calif. “Taken together,
Karma’s Shanghai Big Three represents our transformation from an old-value car
manufacturer to a company building long-term value in part by becoming an openplatform
luxury high-tech automotive incubator.”

The next generation Karma Revero – which will be available for sale during the second
half of this year – will be showcased alongside the first results of a partnership with iconic
Italian luxury design and engineering house, Pininfarina. The next generation Revero will
be sold through the automaker’s growing list of 18 dealers, and a Karma-owned store, in
the United States, Canada and Chile.

Karma released today a glimpse of its Vision concept – a signpost to the company’s future
-- which is intended to provide the world with insight into the automaker’s long-term
direction in terms of luxury craftsmanship, advanced technology, and an evolution in
luxury design language.

“Our New Dawn represents Karma’s short, medium and long-term product direction,” said
Zhou. “We have a solid product plan that spans the next decade and relationships with
the right partners who are helping us accelerate technology and product development.”

Auto Shanghai 2019, held at the National Center for Exhibition and Convention in
Shanghai, opens April 16 and runs through April 25.