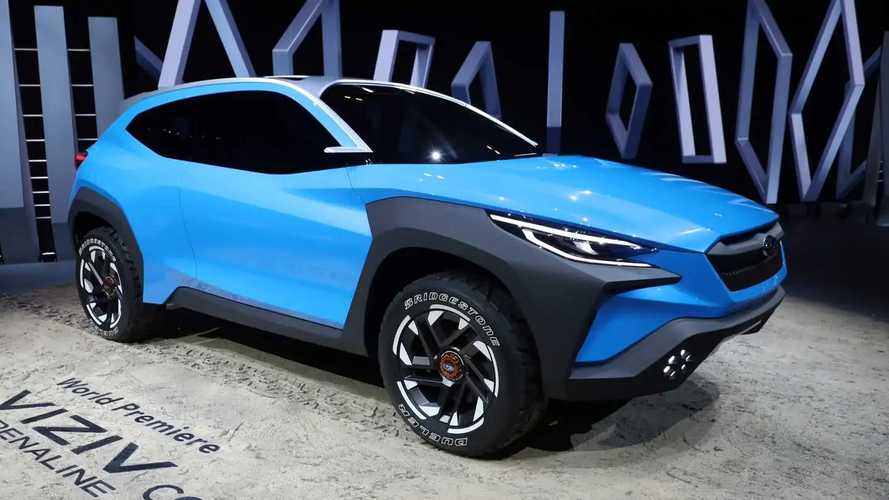 Half doors and huge wheel arches.

Concept cars are a highlight of motor shows around the world. And for the 2019 Geneva Motor Show, one of those highlights is the Subaru Viziv Adrenaline Concept. Debuting an evolution of the brand’s current design language, it looks like a rough-and-tumble crossover in the mould of the Impreza-based XV.

Whether there’s any relation to that car, or indeed if it previews a new model, is unclear. Subaru is keeping its cards close to its chest, focusing mainly on the new style elements on its latest concept. An evolution of the so-called Dynamic x Solid design language, which the brand rolled out in 2014, the Viziv Adrenaline is an evolution, introducing a style philosophy called “Bolder.” Frankly, the press release is filled with vague descriptions and goals, as well as plenty of marketing speak.

So rather than try and sift through that, let’s just have a look at the car. It’s (barely) a five-door, lifted crossover that looks like it could preview a next-generation XV / Crosstrek. A significant portion of those rear doors integrates with the rear wheel wells, to the point that the Viziv Adrenaline looks more like it has two regular doors and two half doors, like a pickup truck. Front and rear overhangs are minimal but are high enough that the Viziv Adrenaline would enjoy impressive approach and departure angles.

That’s important, because this concept has plenty of off-road style. The front wheel arches have taken over the front fender, merging neatly with the headlights, which are more rakish than today’s Subarus. It’s an interesting design touch, especially considering the more restrained – but still larger than usual – cladding around the rear axle. Tough looking Bridgestone rubber and black, centre-locking wheels also contribute to the Viziv Adrenaline’s character.

The Viziv Adrenaline passes on the trendy floating roof, instead adopting a solid, aggressive D-pillar. There is a contrasting white roof, though. In back, the rear hatch is small and high, to accommodate a high rear bumper with plenty of cladding and protection.

While information on the Viziv Adrenaline is remarkably limited, it’s a safe bet that we’ll be able to look back and see style elements from this concept on production Subarus for the next several years.

Subaru in 2014 created its common design philosophy “Dynamic x Solid,” which expressed the brand’s core value “Enjoyment and Peace of Mind.” In the new mid-term management vision “STEP,” which Subaru announced in July 2018, it indicated that the brand is evolving the “Dynamic x Solid” design identity to reflect bolder expression under the new design concept “BOLDER.” Through the new “BOLDER” design philosophy, Subaru aims to broaden the brand’s outlook, define the characteristics of Subaru vehicles more prominently, and create more enjoyment for all passengers.

The “Subaru VIZIV Adrenaline Concept” is the first concept vehicle designed under the new “BOLDER” design philosophy. The body shape of the VIZIV ADRENALINE exhibits dynamic and strong feel. It features a unique roof design, which reinforces the body structure, as well as body protectors. The white accents going through the wheels to rugged all-terrain tires emphasize the feel like outdoor gears. These elements express the toughness and agility of the VIZIV ADRENALINE CONCEPT.

Subaru will continue to evolve its distinctiveness of developing and designing vehicles that deliver the brand’s core value “Enjoyment and Peace of Mind.”

*1: The name VIZIV has been coined from the phrase “Vision for Innovation”