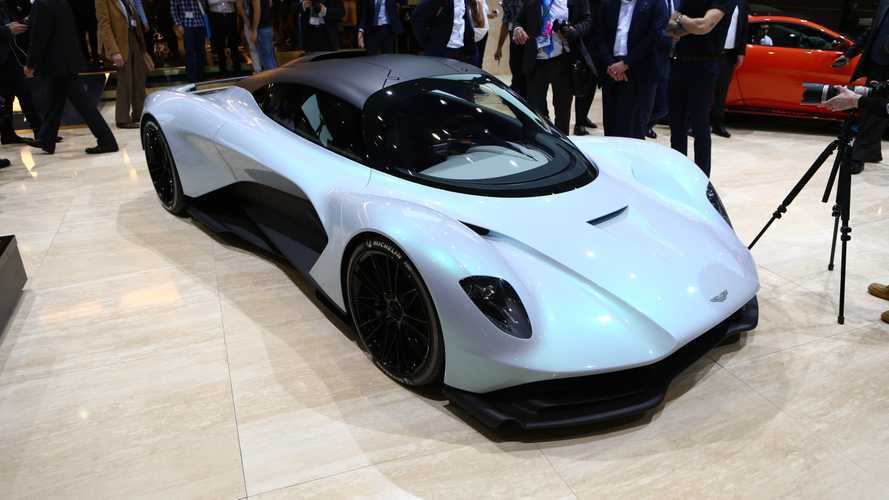 Similar looks, but a new powertrain and a trick rear wing.

Aston Martin in the 20th Century made its bones as a manufacturer of big, fast, comfortable grand tourers but in the 21st Century, it’s trying to make its name as a build of mid-engine hypercars. The latest example of that is the Aston Martin AM-RB 003, the newest member of a family that includes the Valkyrie and Valkyrie AMR Pro and one of the stars of the 2019 Geneva Motor Show.

If you liked the look of the Valkyrie, the good news is that the AM-RB 003 shares its look. But it looks and feels more finalised, less race-oriented, and dare we say, more ready for the real world. The front splitter looks like it sits a tiny bit higher and is less prominent. The tail sits lower and hides a rear spoiler that's not as prominent as the Valkyrie’s (but is significantly more advanced). We also like the new exhaust setup, which features a pair of cannon-like pipes in separate housings, rather than the Valkyrie’s single opening, which look like the tiger-nose grille from a Kia.

The barely more conservative body makes sense, as Aston Martin says the 003 will be more common than the Valkyrie. But don’t expect this car to replace the Vantage as Aston’s new starter car – the company says it will still be built “in strictly limited numbers.”

Those larger numbers don’t mean 003 won’t be nearly as racy, hardcore, or cutting edge as its predecessor. Instead of the Valkyrie’s Cosworth-built, 1,160-horsepower, V12 engine, the 003 ditches half the cylinders, adds a turbocharger and then electrifies the whole setup. Hm… turbocharged V6 with electrification? Where have we heard that one before?

Okay, so we’re being coy about the 003’s Formula 1 lineage than Aston Martin. While the automaker isn’t saying “We liked Red Bull Racing’s powertrain so much, we raided its Milton Keynes, U.K. factory,” the press release explicitly says this new hypercar will include some of the F1-derived tech featured so effectively in the Valkyrie. There are no figures for this engine, but Aston says it was designed entirely in house.

In addition to the electrified powertrain, the 003 has a new, bleeding-edge aerodynamic element. Joining a body crafted by aerodynamic god Adrian Newey is the FlexFoil rear wing, a NASA-approved technology that can change the rear wing’s downforce without actually changing the wing’s angle of attack. It generates no drag, turbulence, or wind noise and looks better because of its clean integration with the body. According to Aston Martin, the technology will be even better when it arrives in production form with “greatly increased actuation rates to allow a real-time response to changes in the vehicle’s dynamic state.” Beats the hell out of that dopey tilting wing Apollo has been playing with, right?

AM-RB 003 isn’t in its infancy, although it’s not exactly fully grown. Aston Martin isn’t revealing many details, aside from what we’ve mentioned here and that the production version of this car – likely with a more exciting name – will arrive in late 2021. We’re looking forward to it.

All about the Valkyrie: