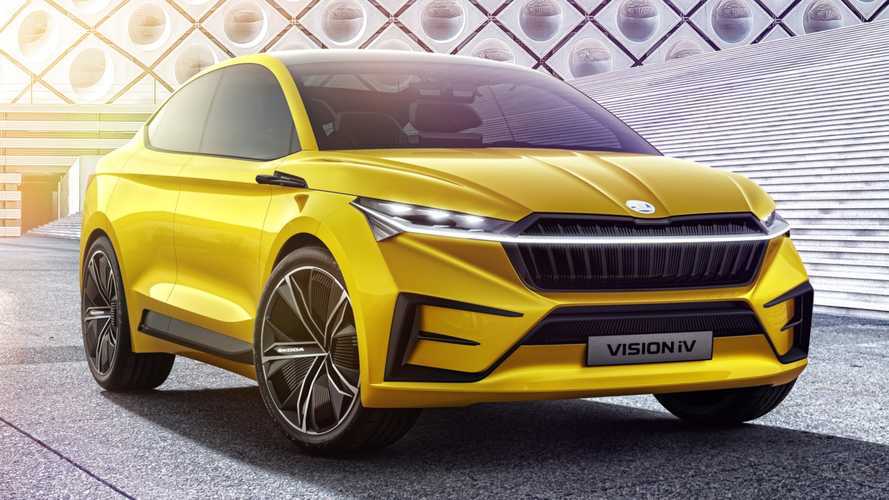 Surprisingly sleek for a Skoda.

The Kamiq small crossover is without a shadow of a doubt Skoda’s big debut this week at the Geneva Motor Show, but the Vision iV concept is also relevant and deserves our attention. Signalling the company’s big electrification agenda, the crossover-coupe looks surprisingly sleek for a Skoda and makes us curious about how the company’s production models will look in 2-3 years.

The Vision iV will go down in history as Skoda’s very first vehicle to ride on the Volkswagen Group’s MEB platform, which is set to underpin a plethora of VAG cars in the coming years. Surely the concept’s gargantuan 22-inch wheels and illuminated grille won’t make it to production, but those sharp body lines can already be seen on new products such as the Scala compact hatchback.

The less-is-more theme adopted by the interior is surprisingly futuristic for Skoda and its usually traditional way of designing dashboards. It goes to show the Czech brand is getting ready to make some drastic changes to its interiors in order to keep up with the times.

With an electric motor mounted up front and another one at the rear axle, the electric concept features an all-wheel-drive system and integrates the flat lithium-ion battery pack into the underbody. The battery has enough juice for up to 311 miles in the WLTP cycle, and since its sits underneath the cabin, it doesn’t eat into the precious interior room.

Skoda is planning a total of 10 electrified models by the end of 2022, with the Superb plug-in hybrid coming later this year to lead the way. The first model from Mladá Boleslav to lose the combustion engine altogether will land at some point in 2020.