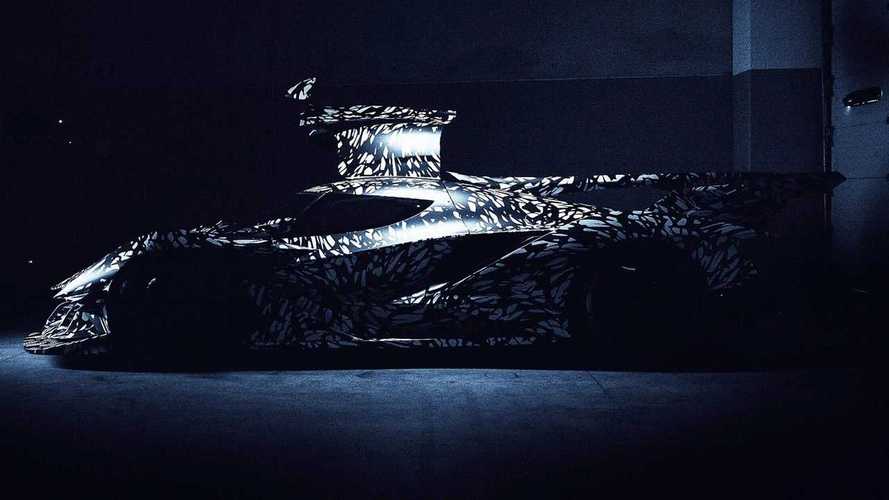 Expect it to use the same V12 as the standard variant.

In this shadowy new teaser, the racing version of the Apollo Automobil Intensa Emozione offers the first hint of its track-ready look ahead of a debut at the 2019 Geneva Motor Show. The automaker isn't providing many details about the machine yet, including what series the vehicle would be eligible to compete in. Judging by Apollo's Facebook post (below), the firm appears to favour the GT1 moniker for this variant, which is somewhat odd since the GT1 racing class is long defunct.

Even with this shadowy, camouflaged teaser, it's clear that Apollo doesn't have to do much to the exterior to convert the road-going Intensa Emozione into a track car (see comparison above). The front splitter's design is nearly identical, although there might be louvres on the racer's fenders – the dark image makes it hard to tell. Gullwing doors remain an eye-catch styling detail. The intake in the rear fenders looks larger in the new teaser. The prominent fin and rear wing remain in place, though.

Can the Apollo IE sound as good on the track as on the road?

Listen to Apollo IE’s menacing V12 scream down the airstrip

The teaser makes no mention of the track car's powertrain, but the Intensa Emozione GT1 likely uses a version of the 6.3-litre V12 with 780 bhp and 560 pound-feet. Even the road-going model weighs a mere 1,250 kilograms, but stripping the interior for the track might shed a few more kilos. It's hard to imagine too much of a diet, though, since the standard Intensa Emozione already uses so much carbon fibre.

Apollo will build 10 examples of the Intensa Emozione with each one selling for £2 million. It's not yet clear whether production of the GT1 counts toward that total.