Spoiler alert: They both win. And lose.

Everybody loves fish-out-of-water drag races, though at this point nobody is really surprised when a Hellcat-powered Jeep Grand Cherokee Trackhawk slaughters a supercar at the drag strip. Did we just spoil the outcome of this video in the very first sentence of the article? Come on folks, this isn’t our first drag race – there are actually three races that occur here, and for the record, yes the bone-stock McLaren 600LT is slaughtered for one of them. The other two? That’s a different story. 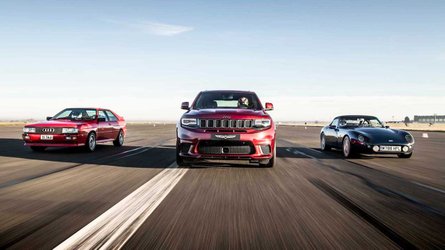 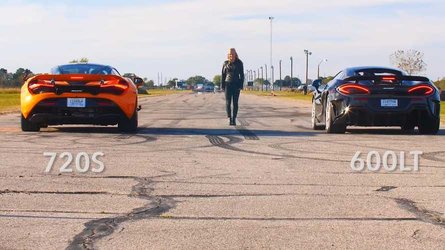 Hennessey drag races its own McLaren 600LT against 720S

Before we go further, here’s what you need to know about each vehicle. The McLaren is unmodified, but that still means a mid-mount 3.8-litre twin-turbo V8 is under the skin, generating 592 bhp in a car that weighs just a bit more than the average spring jacket. It can blitz to 60 mph in under three seconds, and the faster it goes the better its aero shape slices through the wind. The Jeep, however, doesn’t slice wind. It batters forward like a heavyweight prizefighter, because it is, in fact, a 2.5 ton heavyweight. Hennessey also tunes the Hellcat V8 to make 1,000 bhp, which is nearly an entire Mustang GT’s worth of extra grunt versus the McLaren.

Keep those stats in mind as you watch the video, because there are few instances where the numbers are so clearly spelled out in real-life application. Without aerodynamic forces battling the Jeep, its vastly more powerful engine (both in terms of horsepower and torque) and all-wheel-drive grip shove the 2,267 kg SUV forward with absurd acceleration. For the first race, both vehicles launch at the same time without using any sort of launch control, and the McLaren was left for dead. The Jeep puts multiple car lengths on the supercar before aerodynamics squash the Trackhawk’s power advantage, but it's too little too late for the 600LT.

Take that starting-line advantage away from the Jeep, however, and it’s a different story. For the second round, the 600LT uses its launch control and “gets the hit” – meaning the Jeep doesn’t go until the McLaren starts moving. It gives perhaps a half-second advantage to the super, and this time, it’s the Jeep that never stood a chance.

As for the third race? Like we said earlier, it’s not our first race. We won’t spoil the excitement so sit back, click play, and see how these supermachines from different universes conclude this battle.