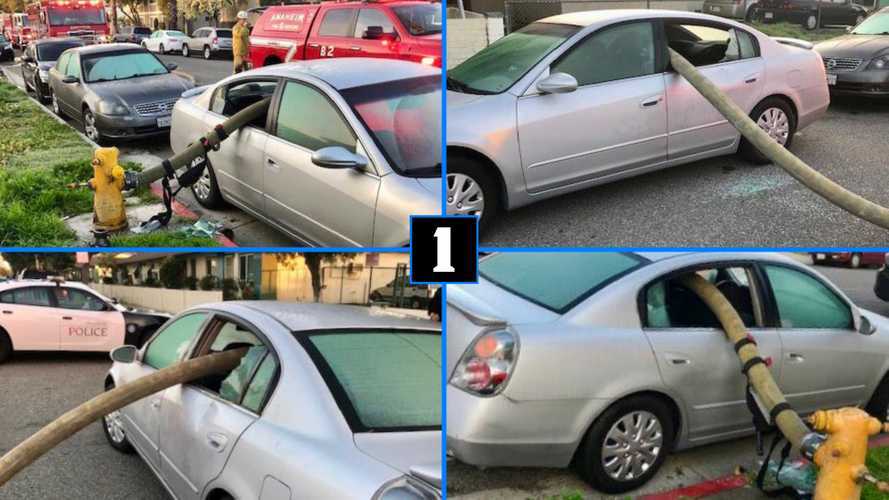 The firefighters will do whatever's necessary to get access to the hydrant, including breaking your windows.

There's a very good reason that you shouldn't park in front of a fire hydrant, and it's pretty obvious. If firefighters need access to the water, then your vehicle is in their way and potentially putting people in life-threatening danger. Anaheim Fire & Rescue illustrates this lesson on Twitter with a recent post, but the message is drawing heat (pun very much intended) from some folks online.

The image shows an older Nissan Altima that is parked right next to a bright yellow fire hydrant, and we can't believe the driver didn't see it. Apparently, there was a fire nearby, and the firefighters needed access to the water, so they smashed out the car's rear windows and ran the hose through the hole. The local police wrote a ticket for blocking the hydrant and eventually towed the car away.

Massive fire takes out more than 300 cars in India
⠀

A lot of people didn't like Anaheim Fire & Rescue's actions, especially breaking the vehicle's windows, and there was a flurry of suggestions about other things the firemen could have done. The heat got hot enough that after replying to many individuals, the organization replied to the original tweet offering a further explanation.

The fire department also explained to commenters that the reason the hose must be straight is to get the maximum water pressure for fighting the flames. In addition, the weight of routing it over the body still would have damaged the car. The department succinctly made the point in one reply: "when we need water to put out a fire, we are going to get water."

So, next time you think about parking in front of a hydrant, just remember Anaheim Fire & Rescue's message about can happen if the fire department needs access to the water for fighting a blaze.