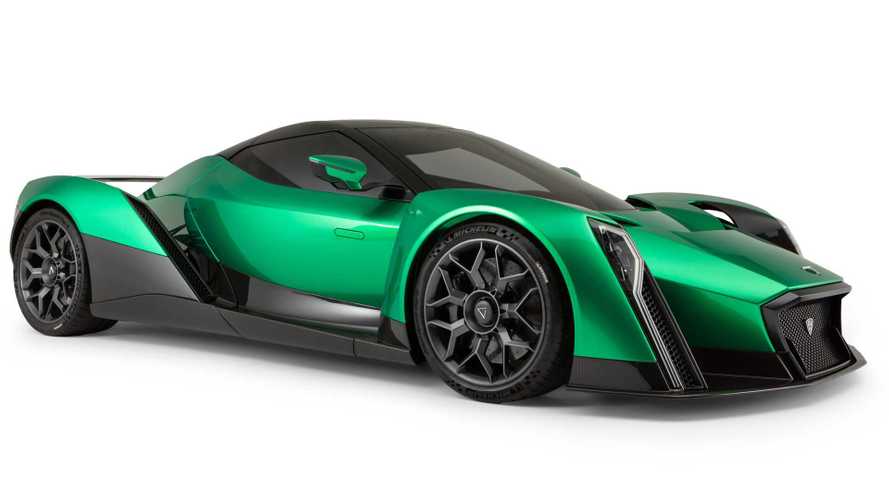 He made some minor changes to the concept, which is now called the D-1 XP-2.

Do you recall the Dendrobium D-1? We wouldn’t blame you if you didn’t. This all-electric concept hypercar has made just a few appearances since debuting at the Geneva Motor Show back in 2017. The last bit of news we heard was in July, when we learned the Singapore-based upstart was headed to the United Kingdom to build production versions of the car. The company is now UK-based, and in a new press release we learn the D-1 has evolved to become D-1 XP-2 thanks to changes from a new designer that joined the team.

What happened so far:

The new guy on the payroll isn’t just any old designer. His name is Peter Stevens, and his portfolio includes work at Lamborghini, Toyota, BMW, and you may have seen his handiwork on a little-known supercar called the McLaren F1 so yeah, he has some serious design chops. We aren’t told exactly what’s different between the old and new model, but the changes are said to improve the car’s aerodynamics.

The crux of the car is its Protocell carbon tub, which isn’t explained in detail but we know the car is entirely carbon fibre to reduce weight as much as possible. The company has a target weight of 1,750 kilograms, which sounds like a lot but don’t forget – this is an all-electric affair that has substantial battery weight to offset.

Speaking of which, Dendrobium doesn’t mention any power or range targets in its new release. Previously, the company touted lofty figures of 1,800 bhp, and at Geneva in 2017, performance estimates of 2.7 seconds to 60 mph and a top speed over 200 mph were mentioned. Whether performance benchmarks have changed along with the car's design – which itself dates clear back to the mid-1990s – is unknown.

The company is pledging to move forward with production in the UK “despite the current challenges and uncertainties continuing around Brexit.” As is often the case with niche projects like this, progress has been slow but we certainly wish Stevens and the Dendrobium team the best of luck going forward.

Stevens – globally renowned for his many landmark car designs, including the McLaren F1, Jaguar XJR-15 and Elan (M100) whilst Chief Designer at Lotus Cars, as well as styling work for Lamborghini, BMW, Toyota, MG, Subaru, Williams and others – has used his considerable talent to subtly re-work the already-dramatic Dendrobium D-1 hypercar with the new XP-2 concept.

Peter has painstakingly studied the Dendrobium D-1’s advanced aerodynamics and made small but beneficial changes to the new XP-2 version of the all-electric, all-British hypercar.

The distinctive D-1 looks like no other supercar or hypercar in the world, reflecting Dendrobium’s focus on having technology embodied in sculpture that is a testament to the British marque’s endless pursuit of quality in terms of thought, design and build; all areas where the UK excels. With a target weight of just 1,750kgs, the fully carbon fibre D-1 XP-2, with its superlight and super strong advance composites and alloys, will represent the true feel of a supercar, not big and heavy, allied to impressive linear performance, and re-write the rules for the hypercar ownership experience.

The fully-British Dendrobium Automotive is looking to manufacture the stunning electric D-1 in the UK, despite the current challenges and uncertainties continuing around Brexit. As well as Dendrobium Automotive’s aim to manufacture its technically advanced electric D-1 in the UK, it is enthusiastic to keep the technology development intellectual property and supply chain in Britain to help sustain and create new jobs and opportunities.

The lightweight construction of the D-1 is based on a unique Protocell carbon tub which has been skillfully engineered with future adaptability for further generations of Dendrobium e-performance cars. In addition to its advanced vehicle technology, the D-1 has enormous drama and presence thanks to its unique Bio-Aerial Locomotion door and roof opening system, which is inspired by the Dendrobium orchid plant which unfurls naturally in a similar manner, from which the new British hypercar company takes its name.

Commenting on Professor Peter Stevens joining the Dendrobium team, Nigel Gordon-Stewart, Chairman and CEO of Dendrobium Automotive, says, “I am hugely excited and honoured to have Peter join our talented Dendrobium team, as he is such a gifted and acclaimed vehicle designer, with an enviable track record of truly great and visually stunning supercars to his name.”

Professor Peter Stevens, adds, “I have worked with numerous future-focused high-performance supercar projects over the years, but few are as exciting and original in concept as the all-electric Dendrobium D-1; a car with so much potential. My small changes to the D-1 to create the new XP-2 were inspired by improving airflow of the car, as well as visually enhancing the drama of this exceptional electric hypercar.”