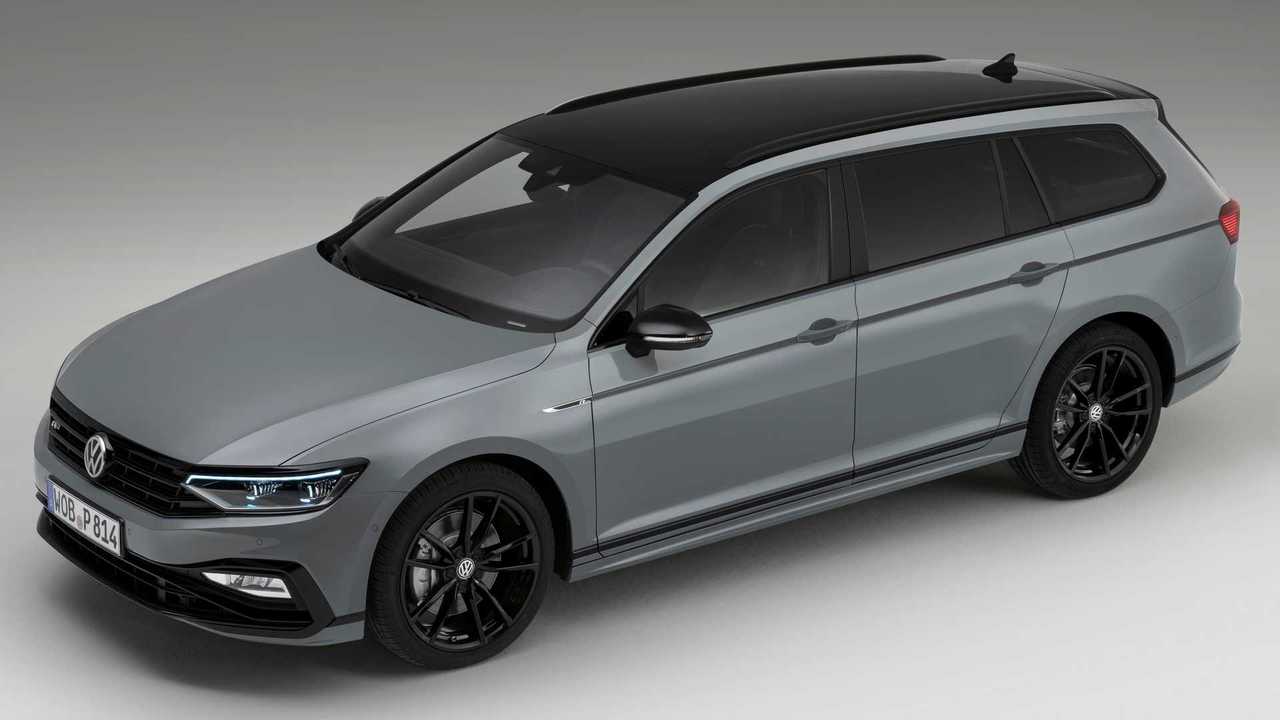 It's got basically everything you'd want from a midsize estate, and then some.

Billed by Volkswagen as being “the most important family car in the world,” the Passat has a special place in the company’s lineup even though crossovers are taking over. The MQB-based European version was facelifted at the beginning of the month and now is ready to receive its first special edition. Available exclusively as an estate and in just 2,000 examples, the R-Line Edition is basically what happens when you tick a lot of the boxes on the list of optional goodies.

Featuring 4Motion all-wheel drive as standard, the generously equipped Passat Variant can be had only with the top-spec engines, namely the 268-bhp 2.0 TSI petrol unit or the 237-bhp 2.0 Bi-TDI twin-turbodiesel. The large estate comes finished in a shiny new shade called Moonstone Grey combined with a series of black accents for a contrasting effect, with the most obvious being the large glossy black roof.

Complementing the black theme are the side mirror caps, side window frames, roof-mounted rear spoiler, and the diffuser at the back, while the 19-inch alloys come in a high-gloss black flavour. At the back, the LED taillights have a black tint to complete the look. Since we’ve mentioned the lights, the ones up front are of the matrix LED variety launched together with the facelifted Passat.

Once you hop inside the cabin, you’ll immediately notice a predominantly black theme, including for the sporty R-Line seats using a combination of Nappa leather and what VW refers to as “carbon” leather. The R-line logo adorns the stainless steel side sills, while the pedals are also finished in brushed stainless steel.

Get to know the updated Euro Passat:

Europe's 2019 VW Passat shows it all in walkaround video

Like we’ve mentioned before, the Passat Variant R-Line Edition has basically everything: digital instrument cluster, the larger 9.2-inch infotainment, Area View camera system, and VW’s up-to-date adaptive damper control. Wolfsburg also throws in its Travel Assist, which enables the estate to offer partially assisted driving by automatically steering, accelerating and braking the car while it travels at speeds of up to 130 mph.

VW will bring the Passat Variant R-Line Edition next week at the 89th Geneva Motor Show where we’ll also going to see the T-Roc R performance crossover, albeit in a near-production concept form.

Pre-sales of the limited edition will begin in Europe in May.

Countdown to the launch of the extensively upgraded Passat has begun: The update to the Volkswagen bestseller that has sold almost 30 million units over the years, will be unveiled to the public for the first time on 7 March at the Geneva International Motor Show. Volkswagen celebrates the launch with the world premiere of an equally exclusive sporty limited edition: the Passat Variant R-Line Edition. Limited to 2,000 units. All-wheel drive (4MOTION) with optional top-of-the-range engine with 176 kW/240 PS (TDI) or 200 kW/272 PS (TSI). Pre-sales of the limited edition will begin in Europe in May.

The new Passat Variant 4MOTION R-Line Edition configuration comes in a unique design, with the high-tech all-rounder painted in the new “Moonstone Grey” finish. A number of black feature elements have been added to provide contrast, most prominent among them the high-gloss black roof. The roof-edge spoiler, roof rail, and wing mirror caps are also black. The side window frames, rear diffuser, headlight rims and all trim also come in high-gloss black. The dark LED tail lights and high-gloss black 19-inch alloy wheels (“Pretoria” type) have also been consistently integrated into this colour scheme.

Black also dominates the interior. Driver and passengers sit on R-Line sports seats, with seat centre panels covered with fine-quality Nappa leather, and the side bolsters with carbon leather. Pedals are finished in stainless steel (brushed), and the side sills (with R-Line logo) also come in stainless steel. New ambient lighting brings a wide range of colours into play.

The limited edition also features almost all the new technologies on board as standard, including the Digital Cockpit (digital instruments) and the glass-covered 9.2-inch Discover Pro navigation system with integrated SIM card (eSIM) and R-Line start screen. Thanks to the new wireless App Connect, iPhone apps can be wirelessly integrated into the infotainment system via Bluetooth for the first time, using Apple CarPlay.

Another new feature is Travel Assist. This assistance system means that the Passat is one of the first cars worldwide to have partially assisted driving at up to 210 km/h. It allows the Volkswagen to take over steering, braking and acceleration. All the driver needs to do is keep their hands on the steering wheel – the Passat checks that is happening using the brand’s first capacitive multifunction leather steering wheel, which reacts to a gentle touch. Travel Assist is a fusion of the front camera, Front Assist pedestrian monitoring system, Park Assist parking manoeuvre system, Side Assist lane changing system, and the ACC automatic distance control system, into a new, intelligent assistance system.

Other standard equipment includes the new IQ.Light LED Matrix headlight system, the Area View camera system, and the latest version of the DCC adaptive damper control system. The sporty positioning of the launch model designed by Volkswagen R – similar to the Golf R2 and new T-Roc R1 – is underlined by the “ESC off” function, which is used to disable the electronic stabilisation programme when driving on race tracks.