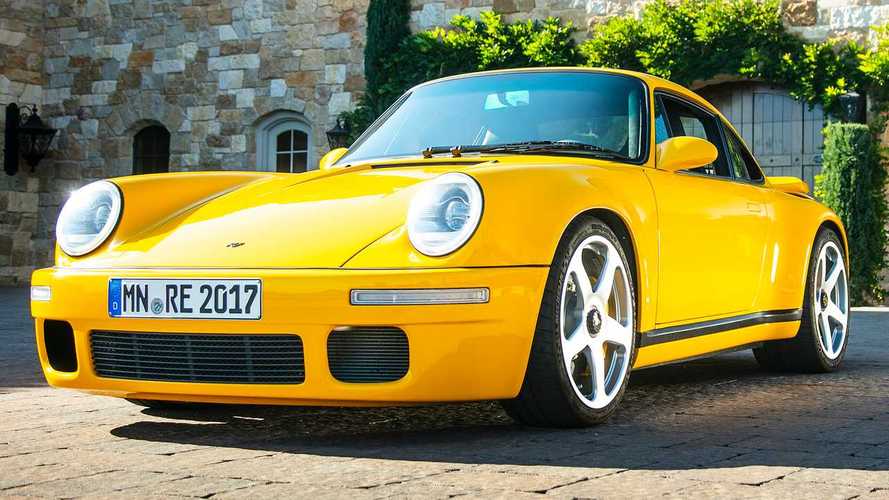 The CTR looks old but is thoroughly modern underneath the skin with a mostly carbon fibre monocoque.

Ruf will deliver the first example of its retro-styled CTR Anniversary and will debut the more modern looking GT at this year's Geneva Motor Show. This year is the Porsche overhauler's 80th anniversary since Alois Ruf Sr. founding of the firm in 1939 as a vehicle repair shop.

Ruf unveiled the CTR Anniversary as a prototype at the 2017 Geneva Motor Show that was appropriately called the CTR 2017 (gallery below). While the design looks like the classic 1987 Yellow Bird, it actually rides on Ruf's first in-house developed chassis. The monocoque is predominantly carbon fibre, except for steel crash structures at the front and rear. All of the body panels are carbon fibre, too. The lightweight material keeps the total weight to just 1,200 kilograms. For comparison, a 2020 911 Carrera 4S is 1,582 kilograms.

Ruf installs a twin-turbo 3.6-litre flat-six engine in the CTR Anniversary that produces 700 bhp. The coupe can reach a top speed of 224 miles per hour. For the 2017 prototype, which had very similar specs, Ruf estimated the CTR was capable of hitting 62 mph in less than 3.5 seconds and to 124 mph in under 9 seconds.

The CTR 2017 had a double-wishbone layout at the front and rear with a pushrod configuration for the shocks. Ruf didn't any offer any details about the production version's setup in the model's announcement.

If you prefer a different look for your Rufs, then the new GT might be more your style. It uses the previous 991-generation Porsche 911 as a starting point. A 3.0-litre flat-six makes 515 bhp and 476 lb-ft. The model has a seven-speed dual-clutch gearbox and hit 62 mph in 3.4 seconds. More details about the GT, including photos, should arrive at the Geneva show.

The prototype RUF CTR 2017, now known as the RUF CTR Anniversary.
RUF Automobile will unveil the first production example of the RUF CTR Anniversary as well as the RUF GT next month in Geneva, Switzerland, kicking off the manufacturer’s 80th anniversary.
Pfaffenhausen, Germany (February 20, 2019) – RUF Automobile GmbH, manufacturer and creator of bespoke sports cars that combine performance and suitability for everyday use, will unveil two cars at the 89th Geneva Auto Show on March 5 in Hall 5 at Stand 5030 of the Palexpo in Geneva, Switzerland. The first production example of the RUF CTR Anniversary, known in prototype form as the RUF CTR 2017, will be unveiled alongside the all-new RUF GT. The pair will act as anchors in the RUF booth alongside several other RUF models from throughout the companies 80-year history, including the eRuf which was presented at the Geneva motor show in 2009.

The first production example of the RUF CTR Anniversary will be delivered to its owner during the Geneva Auto Show. The model was first announced at the 2017 Geneva Auto Show on the 30th anniversary of the original CTR and produces 710 PS (700 BHP) from its twin-turbo 3.6L, flat-six engine. Weighing in at just 1,200 kilograms (2,640 pounds), the 2019 RUF CTR Anniversary has a top speed of 360 km/h (223 mph).

“Each year we hope to push the technological envelope further, creating a more enjoyable, more usable and better performing sports car,” said Estonia Ruf, marketing director of RUF Automobile GmbH. “The two cars being unveiled in Geneva are the pinnacle of their respective niche in the car world. They are the best options when it comes to pure driving pleasure. That was the goal from the start.”

This year marks the 80th anniversary for RUF Automobile, originally founded by Alois Ruf Sr. in 1939. The company will be celebrating its anniversary throughout 2019 both in Pfaffenhausen and at events around the globe. Use the hashtag #80YearsOfRUF to join in celebrating on social media.

The exact time for the press conference will be announced soon.For more information on RUF automobiles, visit the RUF website at ruf-automobile.de/en/

ABOUT RUF AUTOMOBILE GMBH
In 1939, Alois Ruf Sr. first formed his company, AUTO RUF, as a general service garage. The company grew and in 1949 he added a gas station to the company complex. By 1955, Ruf Sr. recognized a need in Germany for a full-size tourist bus and challenged himself to build his own to run this as a separate business. In 1963, the company began specializing in Porsche vehicles, a direction that Alois Ruf Jr.  vowed to continue when he assumed directorship of the company in 1974.  In the following year, the first RUF-enhanced Porsche model made its debut. Now it is still family run by Alois and Estonia Ruf.

The eRuf, unveiled at the 2009 Geneva Motor Show, will be on display in the RUF stand.