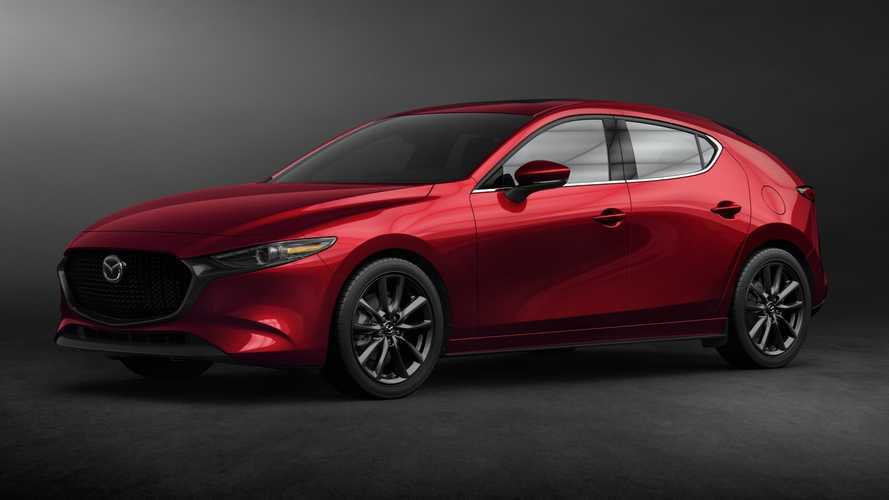 Mazda’s new-generation Mazda3 hatchback is now available to order with prices starting at less than £21,000.

More on the new Mazda3:

2019 Mazda3 debuts with cutting-edge style and tech in LA

The new Golf-rivalling family car was revealed at the Los Angeles Motor Show last year, and the first UK-spec cars will arrive with customers in May. Featuring a fresh new design, improved on-board technology and a choice of petrol and diesel engines, the cheapest version will cost £20,595.

That money will buy you the SE-L model, which comes with satellite navigation, a head-up display and LED headlights, as well as radar-operated cruise control, which maintains a safe distance to the car in front.

For £21,695, meanwhile, you can move up to the SE-L Lux version, which comes with a reversing camera, keyless entry and heated front seats, although another £1,100 pays for the mid-range Sport Lux model. Upgrading to that variant buys you some chrome detailing in the cabin, as well as rear privacy glass and a frameless rear-view mirror.

Crowning the range, however, are the GT Sport and GT Sport Tech models. Priced from £24,595 and £25,495 respectively, both versions offer leather seats with power adjustment, a heated steering wheel and a Bose sound system. The GT Sport Tech, though, is marked out by its 360-degree manoeuvring camera and extra safety equipment, which includes a Driver Attention Alert system that monitors whether the driver needs a rest.

Up front, the new Mazda3 gets a choice of two powertrains, with a 2-litre petrol engine representing the entry-level offering. Serving up 120 bhp, it returns around 45 mpg and gets the car from a standstill to 60 mph in around 10.5 seconds.

However, if you spend another £1,800, you can have the 114 bhp diesel engine. That 1.8-litre unit might have slightly less power, but it promises the extra low-down torque and fuel economy proffered by modern diesel engines.

If you wait a little longer, though, Mazda says a clever new petrol engine will arrive later this year, using technology honed in diesel engines to improve performance and economy. At the same time, the Japanese company says a four-door saloon version of the Mazda3 will also join the range.

“I’m hugely excited about this sensational new hatchback arriving in the UK this spring,” enthused Jeremy Thomson, the managing director of Mazda Motors UK. “It only takes one look to see just how much it moves things forward for Mazda, from the stunning evolution of our design philosophy to a cabin that sets new standards for comfort, style and technology – inside and out the all-new Mazda3 has been engineered to deliver the feeling of effortless driving joy.”

“Since its original introduction in 2003, the Mazda3 has been a big part of our success in the UK and thanks to its cutting edge technology, stunning looks and premium appeal, I’m sure the all-new model is going to resonate with customers and make its mark in this most competitive of segments.”

Mazda at the 2019 Tokyo Auto Salon