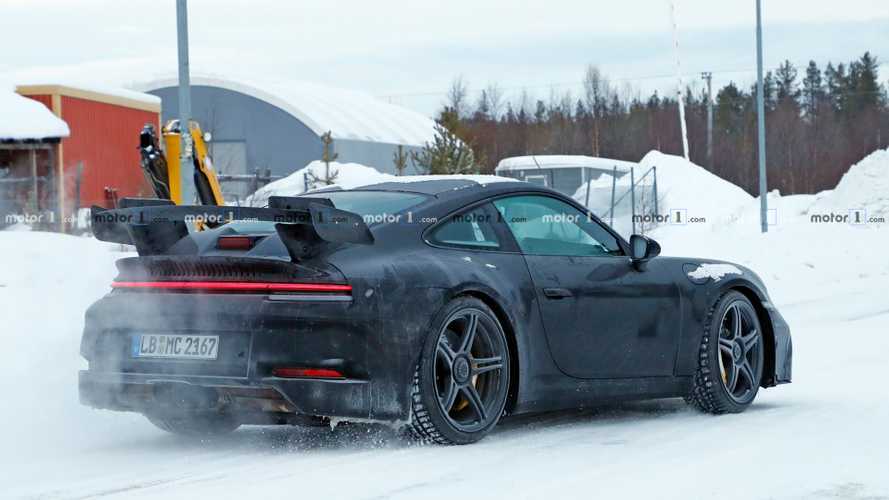 There could be 550 bhp driving those big snow tyres.

We’ve spotted the next Porsche 911 GT3 again, and this time you might say it’s a bit far from home. By that, we don’t mean location but rather the snowy climate. Given the GT3’s track-focused nature we struggle to imagine any owner shuffling one along through a frigid winter, though having the engine at the back would certainly aid in traction. Never the less, testing in all conditions is a part of the development process and this GT3 prototype certainly looks like it’s seen some snow.

Aside from wearing a bit of snow on the frunk, this GT3 also has its front fascia concealed behind a thin facade of black. The same goes for the rear fascia, where clever placement of black tape hides some of the body lines and defining characteristics. There’s still no missing the centre-exit exhaust or the bright yellow brake calipers clamping down on massive rotors, and that rear wing is still mental in every sense of the word. Obviously, the aggressive tarmac tyres are swapped with snow tyres so the GT3 can actually plow its way down the street. Judging by some of the snow packed in the front fascia, we suspect that could be a literal translation as well as a figurative one.

Forced induction for the GT3 was woven into the 911 rumour mill for some time, but at the end of January Porsche flat-out confirmed the ultra-hardcore GT3 RS model would remain naturally aspirated. As such, it's logical to assume the standard GT3 would also forego turbocharging, and that makes us happy. We’ll be happier when we have some seat time in the new car, because we suspect that engine will still be a 4.0-litre flat-six, but tuned to make upwards of 550 bhp.

We’ve seen GT3 prototypes for many months now, but the reveal is still many months away. Current rumours say the car will appear in September at the Frankfurt Motor Show.