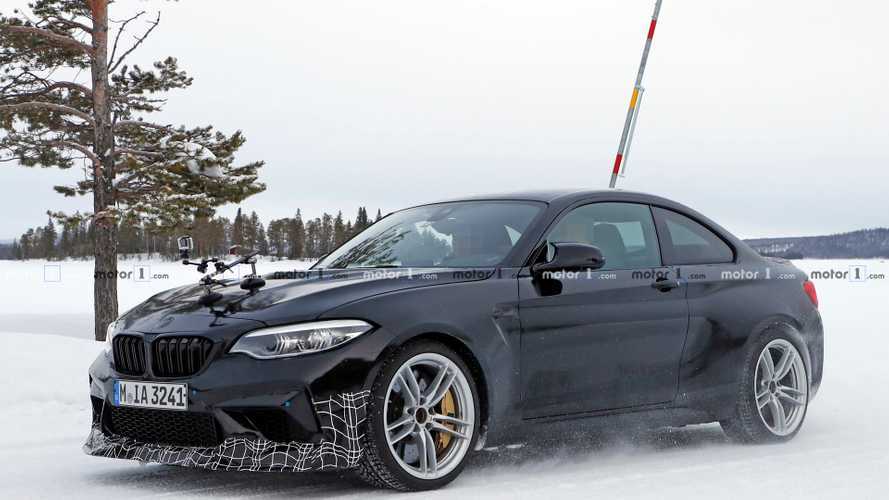 The CS/CSL model should slot above the M2 Competition with upgraded aero components and minor performance tweaks.

A hotter version of the BMW M2 is on the way. Unfortunately for BMW test drivers, the route to production runs through the snowy northern latitudes, as that’s where our spy photographers caught this black Bimmer exercising its upgraded components. Truth be told, we suspect the car is actually blue, but BMW could be taking notes from Porsche by giving its prototypes a black wrap to help conceal details. Even still, this car wears a bit of camouflage swirl at the base of its front fascia and rear spoiler.

The back story on the M2 CS:

Ironically, those two areas immediately capture our attention as locations of interest. We firmly believe this is an M2 CS, and/or the CSL. As such, compared to the M2 Competition it’s getting some aero tweaks in the form of a lower spoiler lip on the front fascia, and a new bootlid spoiler. Those are the obvious changes, but less noticeable are some additional sculpting to the bonnet and a rear diffuser at the back. Under the black wrap we also suspect a carbon fibre roof.

Massive brakes are clearly visible behind the wheels, and rumours suggest those will be upgraded carbon ceramic units. We’ve also heard the beefed-up M2 will wear 19-inch forged Y-Spoke 763 M wheels. Other potential performance enhancements are unknown, but at the very worst this car will deliver 405 bhp from the twin-turbo inline-six found in the current M2 Competition. Cog swapping could be relegated to the seven-speed dual-clutch gearbox available on the Competition, but the tried-and-true six-speed manual might be offered as well.

Similarly, we’ve heard no hints as to when the car could hit dealer showrooms. This is only our second sighting since first spotting a white test mule back in October; we’d expect to see a few more test cars out in the wild leading up to a reveal. Seeing the M2 CS unwrapped later this year, possibly in September at Frankfurt, is a reasonable timeframe.