2020 Alpina B7 video details the fastest saloon in the world

It's technically 1 mph faster than the Dodge Charger Hellcat.

The recently introduced Life Cycle Impulse (LCI) of the BMW 7 Series was actually a major facelift for Bavaria’s flagship saloon, at least in terms of design. It introduced what could be the biggest kidney grille in the history of the company which, just a month after the debut of the car, was matched by a set of multi-spoke wheels from Alpina. Of course, we are talking about the 2020 B7 saloon which was revealed earlier this week.

We are not the authority to confirm that, but Alpina’s latest creation could also be the world’s fastest saloon. Until now, the Dodge Charger Hellcat was regarded as the fastest four-door saloon with a top speed of 204 miles per hour but this German beast should be capable of reaching 205 mph. That’s a tiny advantage but it still counts.

All you need to know about the B7 and 7 Series:

2020 Alpina B7 oozes class even with the gargantuan grille
⠀

That’s, of course, possible thanks to the modified 4.4-litre V8 engine under the bonnet which produces 600 bhp and 590 lb-ft of torque. Kick the pedal to the metal, and you’ll reach 60 mph from a standstill in only three and a half seconds. That’s a tenth of a second quicker off the line compared to the outgoing Alpina B7 super saloon.

If you haven’t closed this article so far, then you are probably okay with the new shape of the 7 Series (and Alpina B7 respectively) kidney grille. That probably means you want to see more and the video at the top of this page should give you more than enough. It’s a walkaround clip showing the exterior of the car in details, as well as giving us the first chance to hear the exhaust sound of the B7. Enjoy! 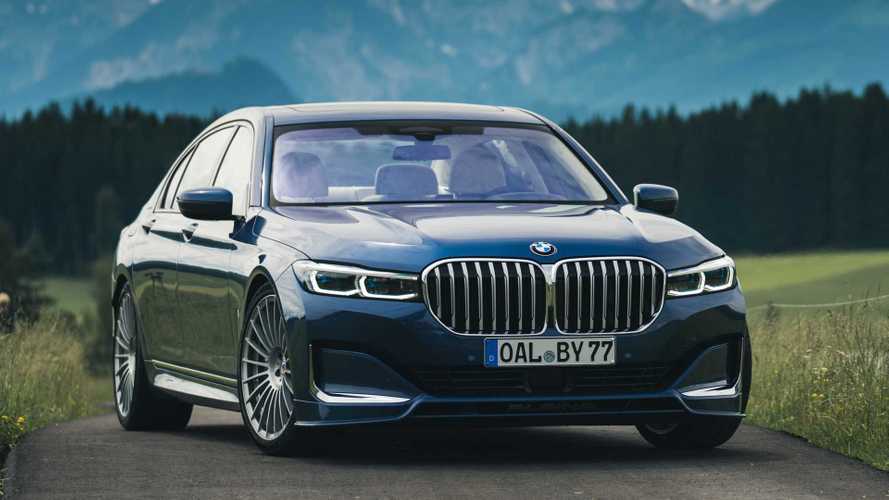