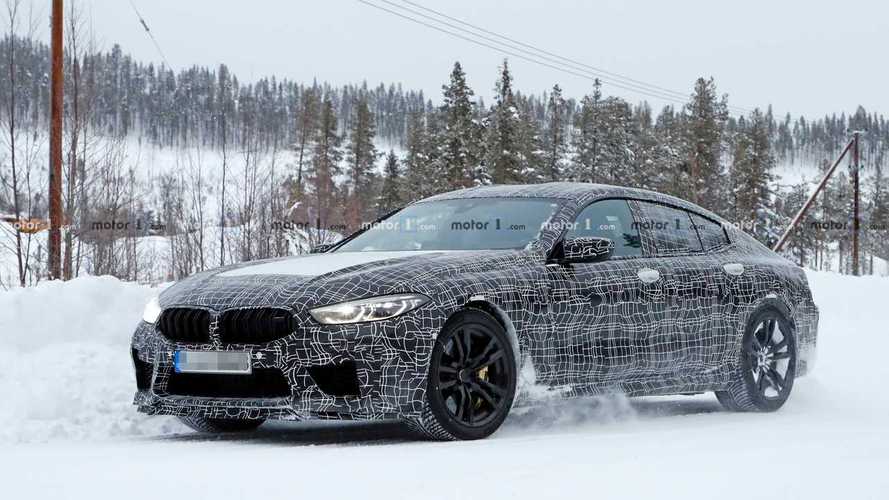 Its quad exhaust outlets should be good for keeping snow away, among other things.

We’ve seen BMW’s upcoming four-door 8 Series out and about on numerous occasions, but this time things are a bit different. If the black grille and massive brakes aren’t obvious enough, the quad exhaust outlets at the rear should let you know this is an M8, caught by our photographers for only the second time. Previously we saw the big four-door in a city environment with patches of snow, but testing has since moved to the winter wonderland of Sweden.

A Four-Door 8 Series Is Coming:

It might be a cliché to say the M8’s hot look heats up the cold countryside, but even with camo wrap on most of the car, it looks intensely good. Compared to the standard 8 Series, the M edition gets a fresh front fascia with aggressive lower intakes, and the darkened kidney grille is mercifully not as big as the new 7 Series facelift. The lower stance and arching beltline give the big car a presence that’s both elegant and aggressive, and it’s punctuated with the rear wing to create what could be the best-looking M car we’ve seen in a long time.

Naturally, there’s more to the M8 Gran Coupe than just looks and lowered suspension. Our insiders tell us the flagship could pack as much as 630 bhp from a tweaked 4.4-litre twin-turbo V8 under the bonnet. It will be the same engine powering the two-door M8 as well as the convertible, and an M8 Competition model isn’t out of the question either. In any case, the 8 Series is BMW’s flagship car, and the M8 will be its flagship performance machine. We have high expectations for this car, and as of now, we suspect they will be met.

BMW 8 Series Coupe by Manhart is the M8 alternative

Unfortunately, there’s likely still quite a bit of time until we can put those expectations to the test. We aren’t expecting to see the standard M8 until this summer at the earliest, and the 8-Series Gran Coupe hasn’t debuted yet, either. Right now, all indications point to the M8 Gran Coupe arriving no sooner than late this year, or more likely, early in 2020.