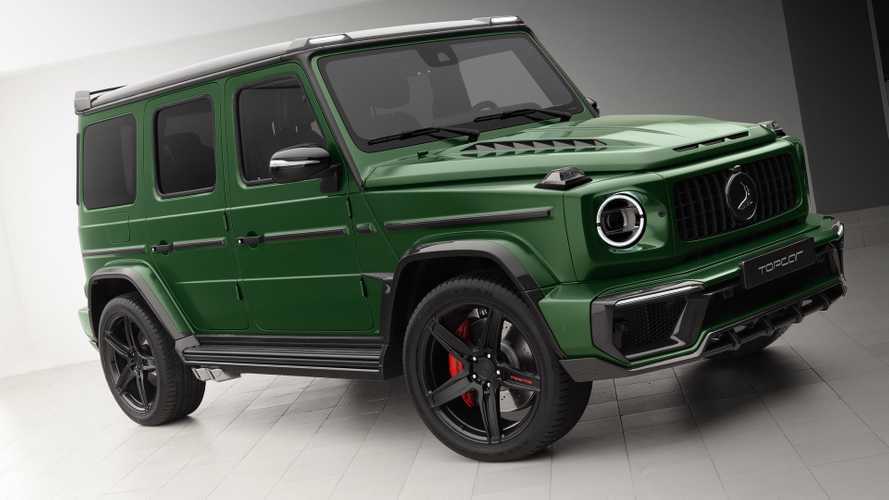 The mean and green off-roading machine.

Even though it’s shaped pretty much like a brick, the Moscow-based tuners at TopCar have decided to give the latest Mercedes G-Class what they refer to as an aerodynamic body kit. Ahead of its premiere next month at the 2019 Geneva Motor Show, the “Inferno” package for the immortal G is making the Internet rounds to show off the numerous upgrades over the standard version. In total, there are more than 70 new components – all of which are manufactured from carbon fibre and Kevlar.

Finished in a semi-matte green shade specially developed for the showcar, TopCar’s take on the iconic Mercedes off-roader is an ode to carbon fibre as it has been generously used across many areas of the body to make the off-road machine look more aggressive than even the mighty G63. Even the rear-mounted spare wheel cover is clad in carbon fibre, as are the diffuser and the roof spoiler.

TopCar mentions that due to the high complexity of the package, it takes about two weeks to complete a single kit tailored to the legendary SUV. Customers can also spend extra and get that beefy bonnet with visible carbon fibre vents, but that’ll cost you €7,500 (about £6,600 at current exchange rates) on top of the €39,650 (£34,880) for the rest of the kit.

The body’s meaner look can be complemented by a shiny set of 22- or even 23-inch alloy wheels, while on the inside you can have genuine crocodile leather and gold. The Geneva-bound Inferno will have a special leather upholstery mimicking the carbon weave to further accentuate the lofty use of carbon fibre.

Multiple power packages have been developed by TopCar in collaboration with GoshaTurboTech, and the hottest of the bunch unlocks a whopping 775 pound-feet of torque.

The Mercedes G-Class Inferno by TopCar will be on stage at the 2019 Geneva Motor Show beginning March 5.

Here are other tricked-out Gs:

Brabus works its magic on the new Mercedes G-Class
++Share