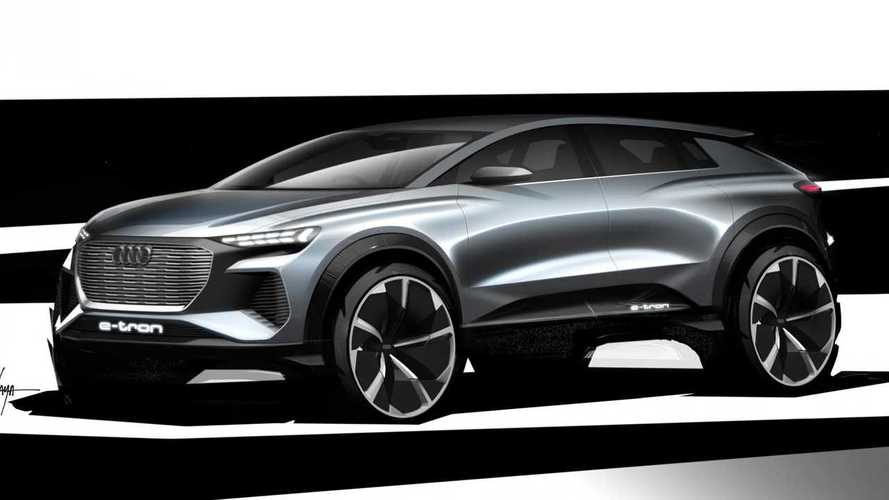 Audi has released the first sketches of its forthcoming Q4 e-tron electric SUV concept, which is due to be unveiled at the Geneva Motor Show next month.

Described by the German manufacturer as “a glimpse of the next stage of Audi electric mobility”, the battery-powered concept SUV previews Audi’s next electric vehicle, which will be unveiled around the end of 2020 or start of 2021.

Aside from confirming the new model and releasing these shadowy sketches, Audi has so far refrained from divulging any details, but the name would suggest that the Q4 e-tron will sit somewhere between the Q3 and Q5 in terms of size. That would make it similar in stature to BMW’s X2, although Audi may prefer a more estate-like stance similar to that of the larger Q8.

However, the sketches appear to suggest a more genuine SUV shape, although the enormous wheels and low roofline almost certainly will not appear quite so pronounced on the production car. More likely to make the switch from concept to production is the wide grille, which loosely mimics that of the recently launched e-tron SUV.

The narrow lights could also make it into the finished article, and though the huge lower side air vents seem unlikely to make the transition in the proportions shown in these drawings, their presence is now something of a calling card for Audi.

The interior, too, looks as though it may bear some relation to the finalised product, with the architecture resembling some kind of cross between the interiors of the A1 and e-tron. The bulky cross-pieces that stretch across the dashboard are evidently part of Audi’s current ‘house style’ for interior design. It’s a styling cue that features heavily in the A1’s cabin, while the multi-tiered centre stack seems to be inspired by the e-tron.

Perhaps unsurprisingly for an electric Audi, technology appears to play a starring role in the Q4 e-tron’s cabin. Most prominent of all the high-tech gizmos is the central touchscreen infotainment system, but that seems to be joined by a digital instrument display (possibly a next-generation version of Audi’s already impressive Virtual Cockpit) and another touch-sensitive interface lower down the centre stack.

What’s less clear is whether the Q4 e-tron will get the camera-based rear-view system that replaces door mirrors on the larger e-tron. The system is designed to be more aerodynamic than standard mirrors, allowing the car to achieve a greater range, but these sketches seem to show more conventional - if heavily streamlined - mirrors adorning the car’s front doors.

Whatever the finalised concept looks like, it won’t have long to wait to find out. The Geneva Motor Show opens its doors to the world’s media on March 5, with the general public welcome from March 7 to March 19.