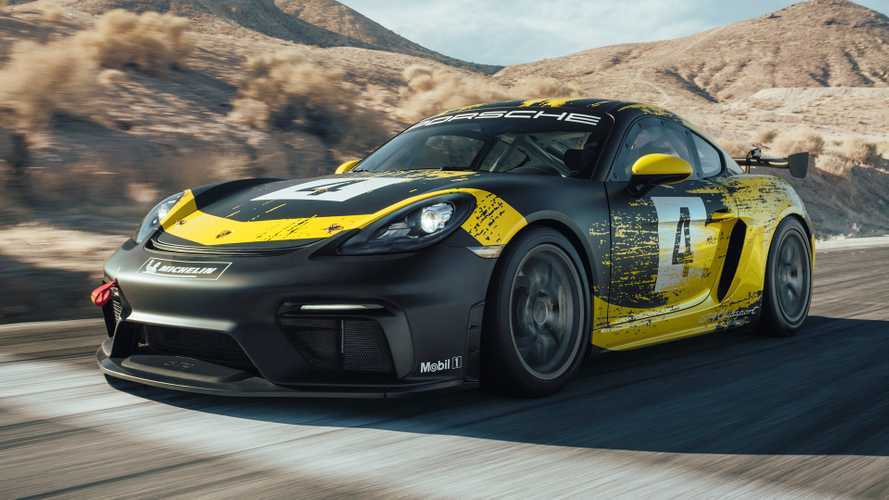 A six-speed manual would be available at launch, but an optional dual-clutch transmission allegedly comes later.

The road-going Porsche 718 Cayman GT4 will debut at the Goodwood Festival of Speed in July, according to a rumour from Car magazine. Like the track-spec Clubsport version, it'll allegedly use a naturally aspirated 3.8-litre flat-six making 420 bhp.

Check out the race car:

Car claims the Cayman GT4 would initially be available only with a six-speed manual. However, an optional dual-clutch gearbox would allegedly arrive in late 2020. Don't expect an interior nearly as bare as the racing version, but elements like thinner glass and fewer luxury amenities would allegedly help to shed around 50 kilograms.

Spy shots (above) already give a very good idea of what the 718 Cayman GT4 looks like. Compared to the already aggressive GTS, the GT4 has even larger intakes in its front fascia, presumably for routing more cool air to the radiators and brakes. A fixed wing adorns the rear deck. The dual exhausts are wider apart than on the GTS, and there's a prominent diffuser back there, too. The Clubsport racer uses natural-fibre composite for the doors and wings, but it's not yet clear whether this lightweight material is on the road car, too.

If you'd prefer this performance but with the added ability to feel the wind in your hair, Porsche also has the 718 Boxster Spyder under development. It should share all of the mechanical elements with the 718 Cayman GT4 but has a bikini-style top with straps that attach to the revised rear deck. There are no details yet about when the range-topping convertible might arrive, but in some cases, Porsche unveils variants of the Boxster and Cayman together – like with the GTS versions. We can't rule out the Spyder dropping its top at the Goodwood Festival of Speed, too.