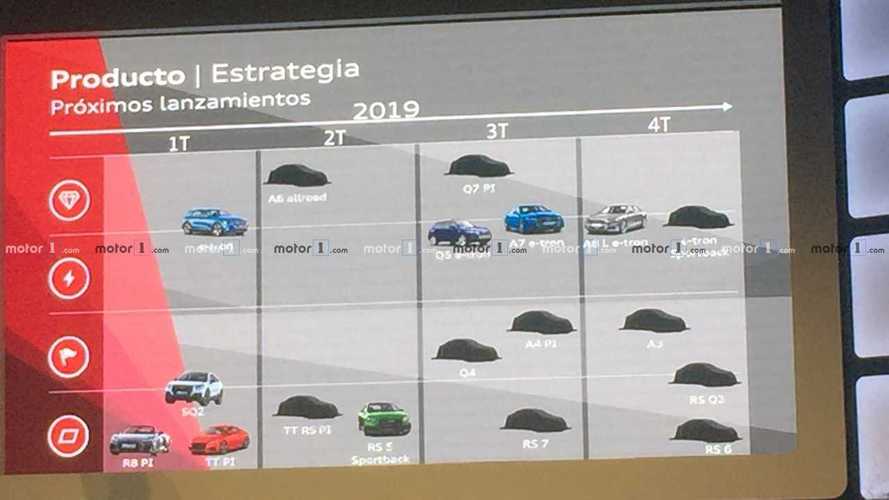 You'll be happy to hear three all-new RS models are planned for this year.

2019 is shaping up to be another busy year for Audi with multiple product launches across the entire portfolio. We were invited to an event held by the company’s Spanish division where this interesting slideshow was presented to the attendees. The members of the press got to learn that during the second quarter of 2019, we’ll see the next-generation A6 Allroad, the facelifted TT RS, and the European version of the RS5 Sportback.

The third quarter is going to be packed with premieres, including the facelifted variants of the Q7 and the A4. A couple of new electrified E-tron models are in the pipeline (Q5 E-tron and A7 E-tron), while the Q family will grow to include the Q4. Speaking of the new coupe-ified compact crossover, the slideshow further confirms the model will, in fact, be called “Q4” as we previously reported and not “Q3 Sportback” as some suggested. The icing on the cake in terms of launches scheduled for the third trimester will be represented by the RS7 Sportback.

In regards to the fourth quarter, two more E-tron models are planned (A8 L E-tron and E-tron Sportback), along with the all-new A3 likely to eschew the three-door variant. The RS family will be further expanded with the RS Q3 and the RS6 Avant.

Interestingly, there are some models we had hoped to see on the slideshow but are ultimately missing. Based on spy shots and videos, we had expectations about a 2019 launch for the SQ8, A1 Allroad, and the S7 Sportback. The latter might still be launched this year considering it would make more sense to debut before the RS7 and not after. It’s the same story with the new S6 arriving prior to the RS6 Avant’s launch, so there’s a pretty good chance Audi has plans for even more product launches than what’s included in the slide.