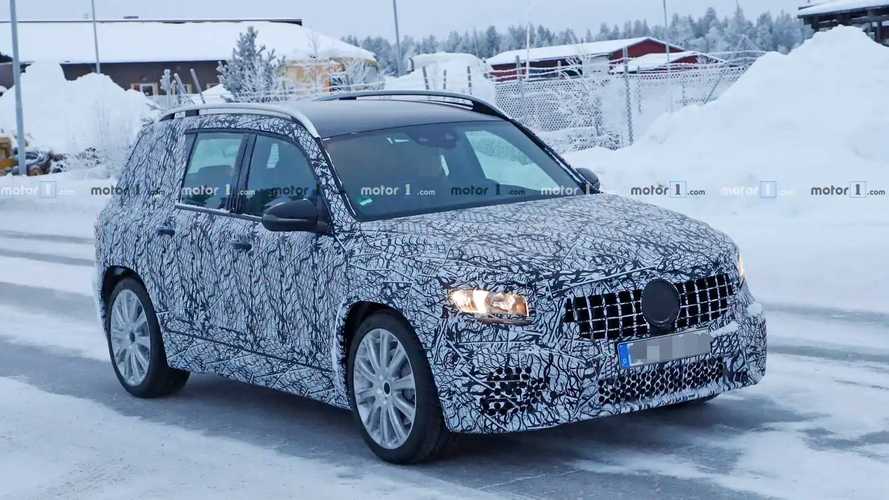 The compact SUV looks cold but its performance should be hot.

We’ve watched Mercedes-Benz engineers and test drivers piloting the forthcoming GLB-Class SUV for quite awhile now. The boxy, compact people mover is expected to finally have an official debut later this summer, but the camo-wrapped Merc captured here might not be at the unveiling. That’s because this isn’t the standard-issue GLB-Class, but the hopped-up AMG model.

2020 Mercedes GLB spied inside and out at petrol station

Specifically, we believe this is the Mercedes-AMG GLB 35, and despite all the GLB sightings, this is only the second time we’ve spied the high-performance model on the road. It’s not hard to spot the AMG differences – the wheels and massive brakes are a dead giveaway, but the camo coverings up front also hide a more aggressive front fascia and a Panamericana grille. At the rear, you’ll also see the trademark AMG exhaust outlets, though Mercedes does try to hide them with a bit of camo. Mother Nature helps as well with some well-placed snow.

Sharing its bones with the A-Class, the GLB-Class will utilise its boxy shape to provide more passenger space on the compact MFA2 platform. As such, it should also share the A-Class powertrain, which in the case of AMG should mean the same turbocharged 2.0-litre engine from the A35, making 302 bhp driving all four wheels. The seven-speed dual clutch transmission should be the gearbox of choice, and of course, the GLB 35 will get a suspension makeover to add some sporty moves to the SUV.

We know AMG is also planning a mental A45 variant for the A-Class with upwards of 400 bhp, so it’s possible the ultimate evolution of the GLB-Class could see a similar machine. The rumour mill on that front is silent thus far, but we do know the GLB 35 is coming. Standard procedure at Mercedes is to launch the performance edition a few months after the base model debuts, and since we know the GLB-Class will appear this summer, expect to see GLB 35 late this year.