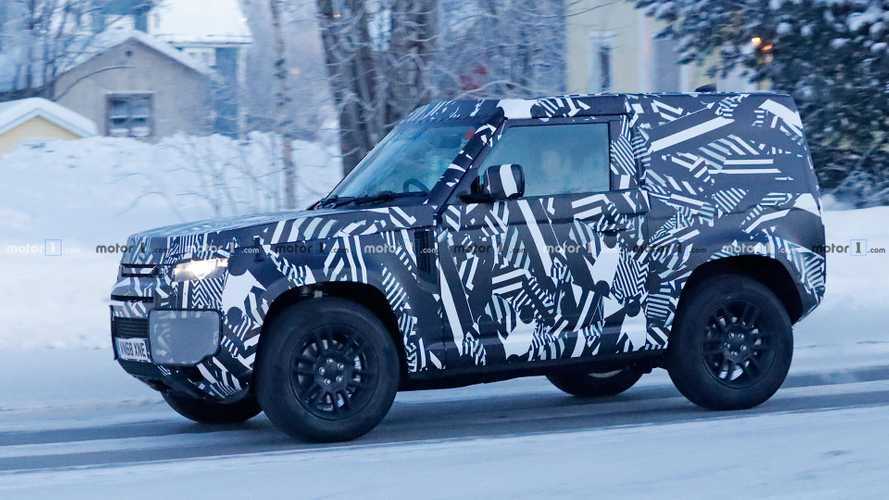 Land Rover continues to give the next-gen Defender a cold-weather workout, and these fresh spy shots catch the two-door, short-wheelbase 90 variant, rather than the four-door 110 in the last set. The smaller footprint really accentuates the SUV's boxy styling by packing the angular look into an even tinier area.

The new Defender wears a modernised version of the original's utilitarian aesthetic. The body lacks curves and instead appears chiselled out of a solid block. It's quite a tough look. Up front, there are narrow, rectangular headlights and a grille with a matching shape. The rear of this test mule has lots of camouflage that makes the tail seem to be a single, upright piece. We expect the final design to be a little less flat, though.

With its short overhangs, particularly at the rear, the 90 might have the best approach and departure angles of the Defender range that should make it the choice for folks who intend to do frequent off-roading with their new SUV. The raised ride height and high exits for the exhausts should help the rig, too, by keeping the vital mechanical parts safe from jagged terrain. A new independent rear suspension should provide a more comfy ride on the road, too.

The new Defender will reportedly launch with a 2.0-litre four-cylinder turbodiesel. A hybrid will possibly be available at launch or will arrive soon after the model goes on sale.

The two-door Defender 90 and four-door Defender 110 will arrive first, and they'll be on sale in 2020. Land Rover will reportedly broaden the range eventually by adding an even larger 130 model and a pickup variant. There are no spy shots yet of either of these, though, so don't look for them to debut anytime soon.