It's a great look at the rear end of both upcoming models.

While the Nürburgring is the most common in Germany to spot automakers testing vehicles, it's possible to catch the mules on the Autobahn, too. This clip catches two of Audi's upcoming performance models driving on the motorway and offers brief looks at the next RS7 and SQ8.

Audi badges this RS7 as a standard A7, but the company doesn't bother to conceal the big, oval-shaped exhaust pipes that immediately identify the svelte saloon as the speedier variant. While not easily legible in this clip, the red sign in German on the back identifies the test mule as a brake testing vehicle, according to the driver in this video. 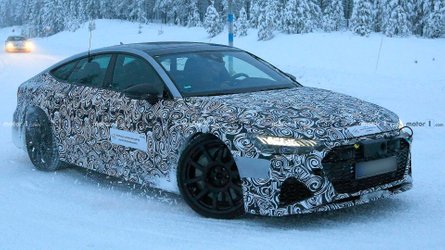 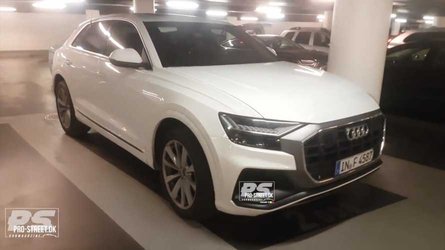 We expect the new RS7 to use a twin-turbo 4.0-litre V8 producing as much as 650 bhp. An eight-speed automatic and all-wheel drive would do the job of getting the ample power to the road. Rumours suggest there could be a more powerful variant later using the 671-bhp drivetrain from the Porsche Panamera Turbo S E-Hybrid.

After a brief interlude, the video switches to filming the SQ8 on a very snowy road. Audi covers the rear of this one in camouflage, but earlier spy shots (above) provide a better idea of what to expect from the sporty SUV. Under the bonnet, there are reportedly different engines depending on the region. Europeans would get a 4.0-litre V8 diesel hybrid making 429 bhp and a stump-pulling 664 pound-feet of torque. In other regions, the model allegedly packs a turbocharged 3.0-litre V6 with an unknown output. Later, an even hotter RS-badged model should pack a V8.

After the 3:59 mark in the video, the footage of the test mules end. After that, feel free to turn off the clip unless you want to watch a company Christmas party in Frankfurt, Germany.