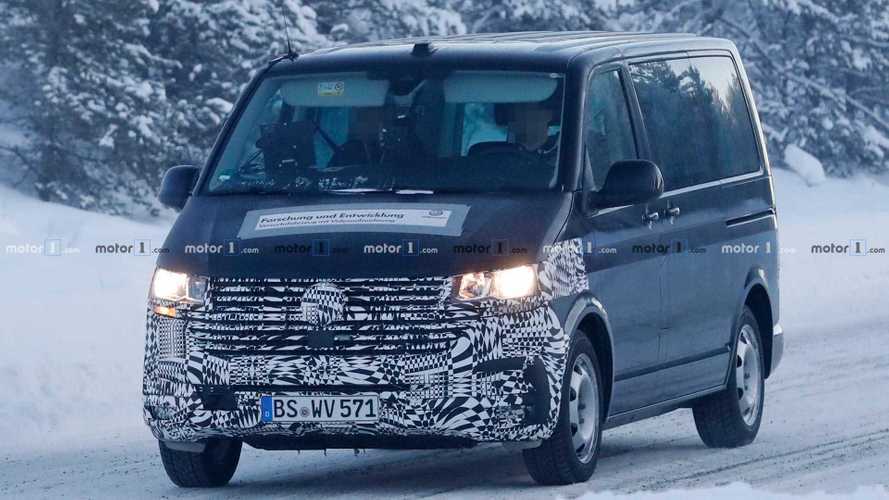 There are new taillights, too.

While we know that Volkswagen Commercial Vehicles has a new Transporter under development, the company also has a refreshed example of the existing T6 on the way. These spy shots provide a glimpse at the minor styling tweaks on the way for the van.

VW's camouflage doesn't do much to conceal the updated T6's revised styling. A larger grille now extends below the taillights, rather than the existing styling that puts a crossbar beneath the lamps. There's also a skinny inlet in the lower fascia, and small driving lights continue to be in the corners.

See the next Transporter:

At the back, VW doesn't change much. The company puts camouflage around the taillights, pointing to new parts there. Otherwise, the rear is identical to the new one.

These spy shots don't show the interior, but we expect changes in there, too. Look for Volkswagen to fit a larger infotainment display. The black rectangle on the front grille is for some sort of sensor, which suggests more advanced driver assistance tech, too.

Spy shots show that VW is using similar-looking test mules (gallery above) to evaluate the next-gen Transporter. The new one reportedly switches to the company's ubiquitous MQB platform in an effort to reduce weight while boosting body rigidity. Plug-in hybrid and fully electric variants reportedly join the powertrain range, in addition to the expected petrol and diesel versions. The van would come standard with front-wheel drive, but all-wheel drive would be an option.

In addition, VW and Apple are reportedly partnering to create a small run of autonomous Transporters with electric powertrains. Initially, Apple intends to use them as employee shuttles to carry workers between the tech giant's two campuses in Silicon Valley.