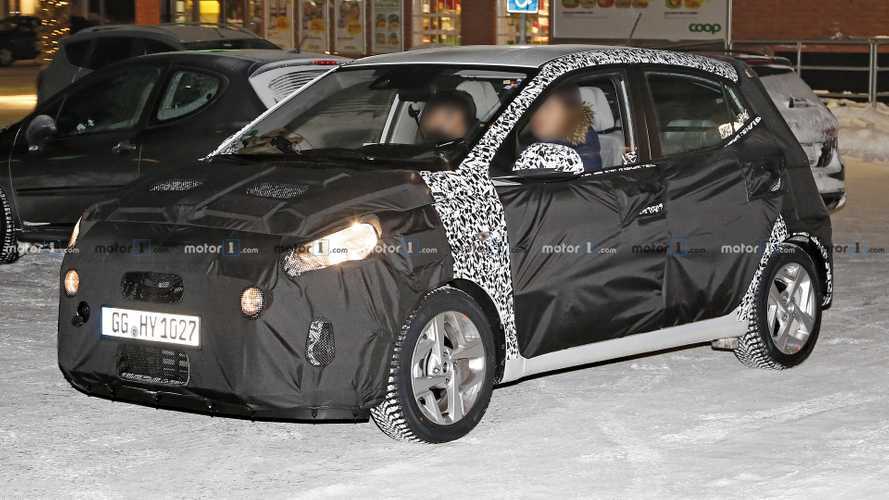 Who said drum brakes were dead?

The Hyundai i10 is an A-segment hatchback serving as the company’s entry-level car. The original version came out in late 2007 and was followed in 2013 by a second-gen model, which towards the end of 2016 received a mid-cycle facelift. Fast forward to present day, the tiny five-door model and a sister model of the Kia Picanto is getting ready for its third installment.

Our spies caught on camera a couple of prototypes of the new i10 while resting in a parking lot at night somewhere in Sweden. Because Hyundai was quite generous with the camouflage material, there’s not much to see as both test vehicles of the city car are heavily disguised inside and out. Rumour has its wheelbase will be elongated considerably compared to the current car, which measures 2385 millimetres between the two axles. It’s worth mentioning there’s a Grand i10 in India and that one offers a more spacious interior courtesy of a wheelbase stretching at 2425 mm.

As far as the design is concerned, the i10 appears to have just about the same headlight arrangement as the current car, so we’re kind of wondering whether these two prototypes actually have the bodies of the new model. The daytime running lights and the fog lights seem to be in the exact same spot, but at the back the taillights are likely different.

This is the current version:

It’s not known at this point whether there will be any changes to the engine lineup compared to the current i10 you can get in Europe with three- and four-cylinder naturally aspirated units. The smaller of the two is a 1.0-litre with 66 bhp and 70 pound-feet of torque while the other one is a 1.2-litre with 86 bhp and 89 lb-ft you can hook up to a four-speed automatic transmission at an additional cost. In some Euro markets, Hyundai also offers a 1.0-litre LPGi running on liquefied petroleum gas and developing 67 bhp and 66 lb-ft.

It would make sense for the new i10 to get the Picanto’s turbocharged three-cylinder 1.0-litre mill with 100 bhp and 127 lb-ft, but only on the more expensive versions of the range.

Hyundai will likely introduce the third-generation i10 either before the end of this year or in 2020.