Ford says “over 700 bhp,” but we won’t know exactly how much power until later this year.

The last several years have been a boon to automotive enthusiasts, as automakers find new and creative ways to shoehorn more and more power into their cars. The Dodge Challenger is the poster child for this movement. It started life with just 425 bhp, but variants like the Demon have nearly doubled that number. It’s the same with the Chevrolet Camaro and Corvette. And now, the Ford Mustang is joining the fun with the 2020 Shelby GT500.

The first GT500 since the Mustang ditched its solid rear axle, there’s still a lot we don’t know about this car, despite its debut at today’s North American International Auto Show. For example, while Ford confirmed that it will carry a supercharged 5.2-litre V8 and a seven-speed dual-clutch transmission, the Blue Oval is playing coy on total output.

At a backgrounder last week, the automaker told Motor1.com that the GT500 would pack over 700 horsepower, but said it was still fiddling with the car’s powerplant and wouldn’t have a final output figure until fall of 2019. Same with the torque output. The rumour mill, though, seems pegged on around 750 bhp and over 700 pound-feet of torque. As for Ford, the company is promising a sub-11-second quarter-mile time, while the GT500 should be able to get to 60 in the mid-three-second range.

What we do know is that this powertrain isn’t some old hunk of iron with a blower attached to it. Ford engineers flipped the 2.7-litre supercharger upside down and somehow tucked the intercooler between the cylinder banks, all in a bid to lower the centre of gravity on the all-aluminium mill. There are high-flow aluminium cylinder heads and forged connecting rods and a trick oil pan with active baffles to keep the engine lubricated through high-G turns – this is a thoroughly modern engine. It also sounds thoroughly angry. Check out the B-roll above, and be sure to turn the volume up.

The same is true of the seven-speed dual-clutch transmission. Complete with a rotary shifter, the new Tremec gearbox is the only available option available for consumers. But why no manual? The answer is both simple and predictable. In fact, it’s the same reason that Ferrari and Lamborghini have abandoned manual gearboxes, and why the new Porsche 911 is launching with a two-pedal setup first – the automatic option is faster. According to Ford, the Tremec seven-speed can execute upshifts in just 100 milliseconds, which is incredibly fast.

Complementing the straight-line ability is shotgun-like stopping power, thanks to the biggest front brake rotors ever fitted to an American two-door. The enormous 16.5-inch discs look like manhole covers with six-piston Brembo calipers attached to them. Ford says these brakes are 20 percent bigger than the stoppers on the GT350, and is a reason the GT500 wears standard 20-inch wheels, instead of the GT350’s 19s.

The suspension features magnetic dampers and a new geometry, while Michelin Pilot Sport Cup 2 tyres are standard. Ford will also offer a pair of optional handling packages for the GT500 – the first is, rather simply, called the Handling Package. It adds adjustable strut tower mounts and a Gurney flap for the prominent rear spoiler. The second and far more aggressive option, the Carbon Fibre Handling Package, ditches the standard 20-inch alloys for a new style of carbon-fibre wheel that dramatically reduces unsprung weight and swaps in 11.5-inch rear tyres in back. The standard PS2s are replaced with a bespoke compound developed by Michelin. In back, there’s a huge, adjustable rear spoiler in exposed carbon fibre. Finally, grabbing the CF Handling pack removes the rear seat.

Regardless of which handling pack you choose, the GT500 looks like a monster. Designers went mad with the wheel arches in a bid to accommodate the 20-inch rubber, while the gaping fascia has twice as many openings as the GT350 along with six heat exchangers. A prominent chin spoiler complements the aggressive diffuser and rear spoiler at the back. But our favourite features is the removable aluminium rain try under the louvered bonnet – it’s there mainly to keep the shiny top of the supercharger dry. It’s a very cool touch.

How brilliant the GT500 will be to drive is a different question, but one we’re eager to answer. Unfortunately, if Ford is saying final horsepower figures won’t be available until fall, it seems unlikely we’ll have get behind the wheel before then. That said, we should expect to hear a lot more about the most powerful production Mustang in the coming weeks and month. We can’t wait. 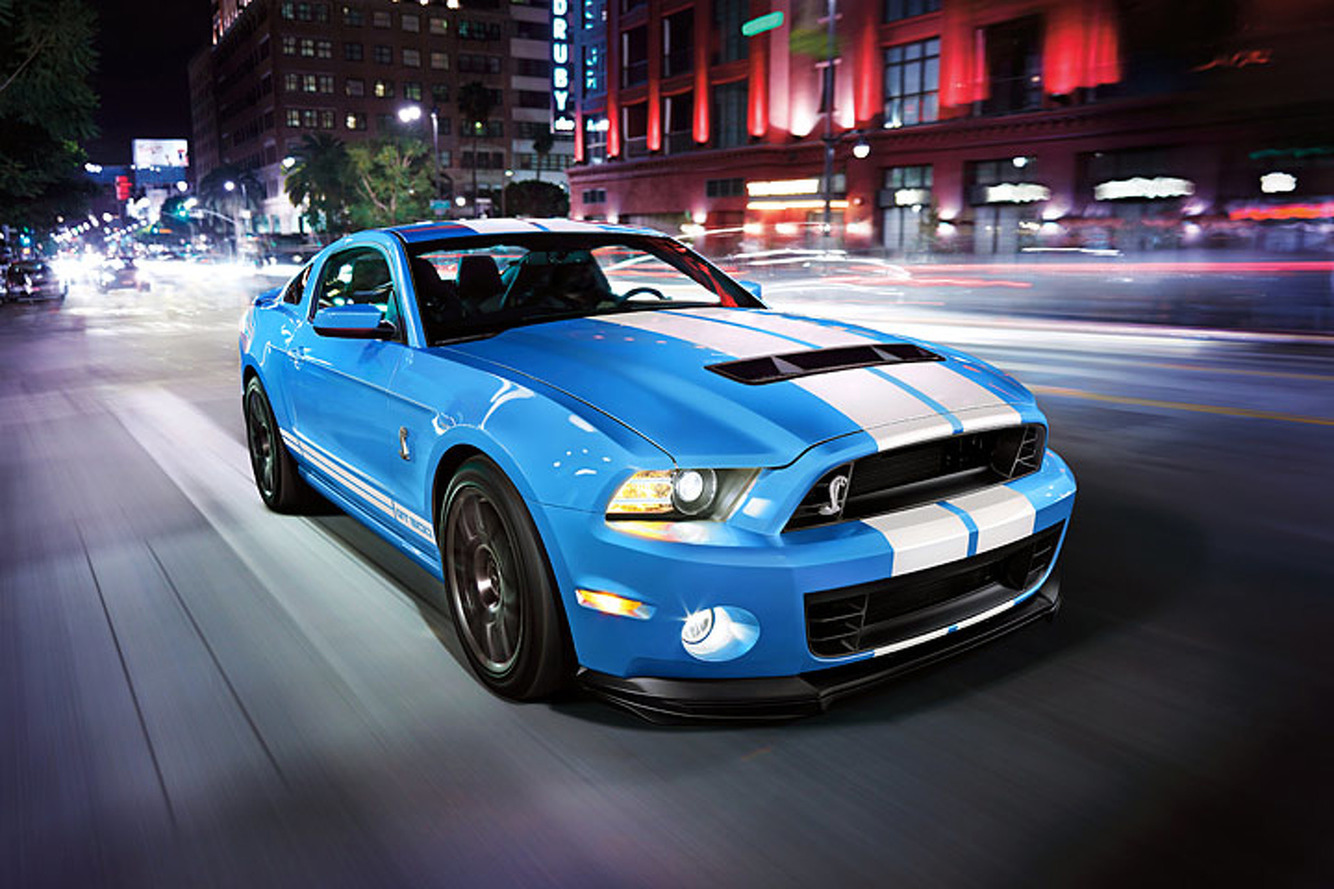