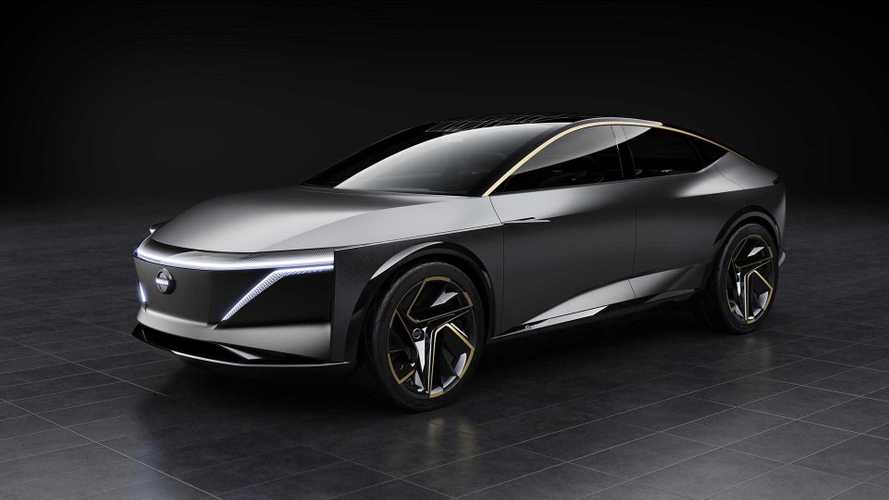 Nissan estimates the concept could go 380 miles on a charge, thanks to a 115-kilowatt-hour battery

Nissan attempts to create a new segment that it calls an "elevated sports saloon" with the unveiling of the IMs Concept at the 2019 Detroit Auto Show. The idea combines the higher ride of a crossover with the svelte shape of a traditional four-door into a fresh electric vehicle concept.

To put the sport into this saloon, the IMs has an electric motor at the front and rear axle that produce a total of 483 bhp and 590 lb-ft of torque. A 115-kilowatt-hour battery pack provides an estimated 380-mile range. Drivers can select between fully autonomous motoring or piloting the car normally.

The IMs' exterior shape is futuristic yet familiar for a saloon. The overall design opts for chiselled surfaces but layers them to create sections with smooth lines. In front, there's no conventional grille, but Nissan still incorporates its trademark V-shaped front end by making the shape out of the headlights. The arching roof looks especially sleek, and like nearly every concept car there are suicide doors for a great look into the cabin from folks at the Detroit show. At the back, a thin strip of LED lighting spans the tail.

On the inside, Nissan intends the aesthetic to evoke "timeless Japanese futurism." The cabin largely features dark fabric upholstery on the seats and gold-coloured touches across the dashboard and door panels. There's an odd three-row seating layout that uses two, stowable seats at the very back and a larger captain's chair in front of them. Multiple digital screens span the front occupants' view. When driving autonomously, the steering wheel retracts, and the driver can turn around to spend time with the passengers.