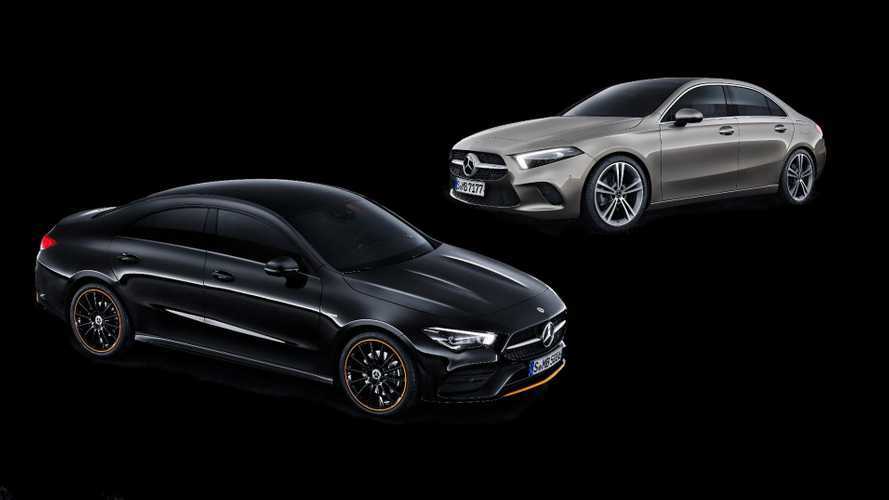 On the surface, these two cars look identical – but keen eyes might be able to point out the differences.

When it debuted in 2015 with a sub-£30,000 asking price, the Mercedes-Benz CLA had its fair share of success. But a half-decade or so mostly unmodified, there's finally a new one. Though this new CLA shares much of the same core values that made the original such a success, it's now sharper, slightly larger, more powerful, and generally a more upscale product.

But how does the new CLA stack up to the A-Class Saloon? On the surface, at least, it appears these two cars are one and the same. But dig a little deeper and you'll find that there's enough distance between the two to make a compelling case for each. Take a look at the A-Class Saloon (left) and new CLA (right) and see if you can spot the differences yourself.

But the CLA isn't just larger, it has a few visual tweaks that keen Mercedes enthusiasts might be able to point out. The headlights, for one, aren't as slim or sharp as those on the A-Class Saloon. There's a slight protrusion right underneath the main bulb that gives them a distinctive look – and they're larger, too. The CLA's bonnet also has a more aggressive shape. Two "bulges" gives it some character over the A-Class Saloon's otherwise flat bonnet.

Outside of that, the grille carries over from the A-Class Saloon almost unchanged, with the large Mercedes-Benz logo located front and centre. The side vents and larger lower vent are pretty much identical as well, outside of some minor changes to the shape of the inserts.

Out back is where the new CLA separates itself more definitively from the A-Class Saloon. The taillights have a flowing shape – similar to those found on the larger CLS – unlike the A-Class Saloon's larger and bulkier units which don't form nearly as neatly into the bootline. The rear diffuser is different, too; the A-Class Saloon has a more shapely butt while the CLA opts for smooth, flat lines almost exclusively. Both of these cars have dual exhaust tips.

The A-Class Saloon and CLA have a similar profile. But as you might have noticed when glancing over dimensions, the CLA is shorter, and its sloped "coupe-like" styling gives it a more compact passenger compartment. The CLA also has fewer lines; the A-Class Saloon has a noticeable beltline that runs from the front headlight to the taillight, while the CLA is almost entirely smooth.

Apart from that, the wheels on the A-Class Saloon and CLA are pretty much the same high-spoke, gloss black fitments (at least in this trim). And the doors themselves have the same overall shape.

While there are noticeable differences between the A-Class Saloon and CLA on the outside, not even the keenest eye will be able to tell their two cabins apart. The inside of the A-Class Saloon and new CLA are identical – from the flat-bottomed steering wheel, to the trio of centrally located air vents, to the optional 10.3-inch MBUX infotainment system.

On the left, the A-Class Saloon's cabin (in this trim) is barely more subtle. Sleek silver finishes and black trim pieces cover most of it, while blue LED accents attempt to give it a softer tone – but the lighting elements are customisable. The CLA's cabin is a bit more bold thanks in part to the orange stitching on the dash and door panel, and the customisable LED accent lights (in these images) giving off an orange hue here to match the exterior.

Since these cars are essentially one and the same, it's no surprise that they share a bunch of elements. But the CLA separates itself by being the more performance-oriented one of the two. Instead of the A-Class Saloon's relatively wimpy turbocharged 2.0-litre inline-four, which produces 188 bhp and 221 pound-feet of torque, the CLA has a more robust four-cylinder that pumps out 221 bhp and 258 lb-ft of torque.