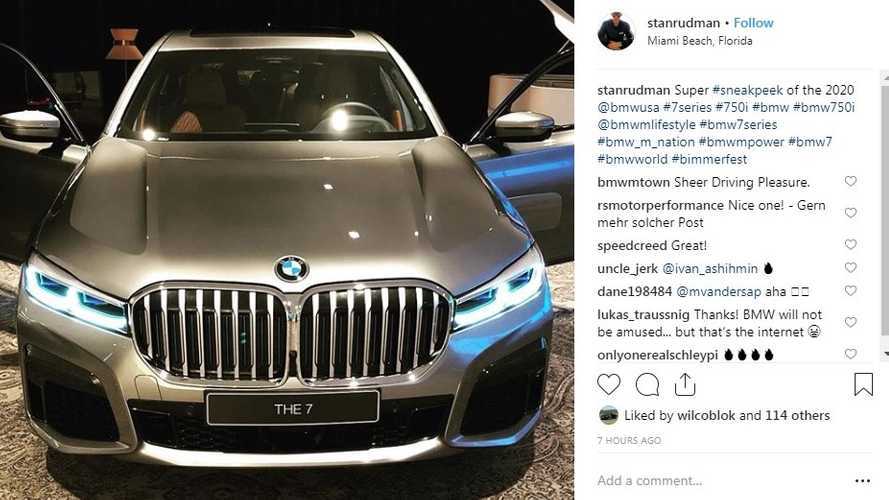 The controversially styled BMW Concept iX7 Performance from last year gave us a taste of things to come as far as BMW’s decision to enlarge its corporate grille, at least for the bigger models. The X7 has a pair of kidneys likely visible from the moon, and it looks like it will be a similar story with the facelifted 7 Series. Only a few days after seeing the fullsize luxury saloon revealing its updated front fascia, another image has emerged on social media.

Likely taken at a private event organised by BMW to show the 7 Series LCI, this 2020 750i does not have any disguise whatsoever. It allows us to see not just the gargantuan grille, but also the reworked headlights likely of the laser variety and with a slimmer shape. The front bumper has been restyled and its huge air intakes indicate we are likely looking at the version equipped with the M Sport package. BMW has also redesigned the bonnet and there are now two large recesses on its sides.

A report published today by BMW Blog sheds some light about the changes we’ll find underneath that new bonnet. The facelift, lovingly referred to as Life Cycle Impulse, for the 740i in both rear- and all-wheel-drive versions will bring 335 or 340 horsepower, depending on region. The 745e plug-in hybrid is said to combine a six-cylinder 3.0-litre with an electric motor for a total output of 388 bhp and 442 lb-ft, while the 750i will up the power ante to 523 bhp or 530 bhp and 553 lb-ft.

As for the crown jewel of the range, the M760i, it will return to European markets after being updated with the Otto particulate filter to comply with emissions regulations and it should have roughly 600 bhp.

My, what a big grille you have: