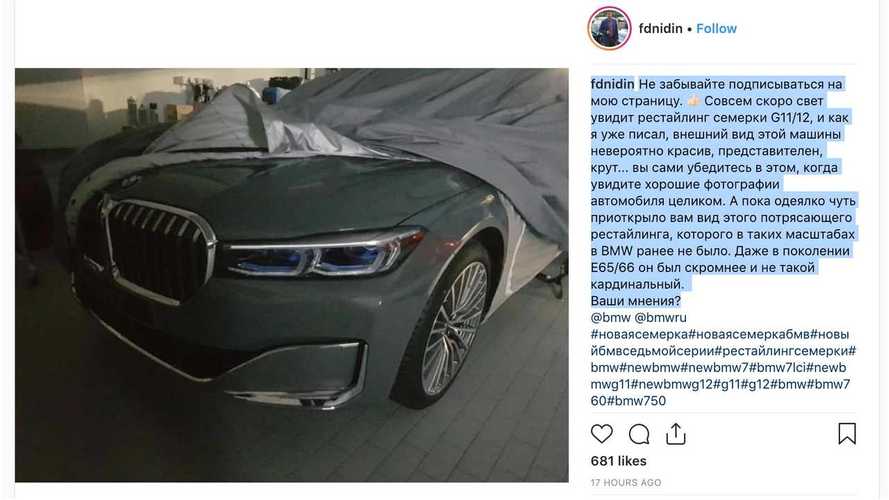 That grille is really, really big.

With spy photos dating back to September 2017, it's not too surprising that BMW is finally close to unveiling the refreshed 7 Series, and Instagram user fdnidin managed to snap a completely undisguised photo of the front end for our best look at it yet.

This is our first chance without camo to see just how immense the 7 Series new grille is. The piece takes cues from the similarly gargantuan opening in the front end of the new X7, but the saloon's smaller stature makes the styling element appear even larger here. The change might be very polarising amongst BMW buyers who prefer a less ostentatious appearance from their six-figure luxury cars.

The refreshed 7 Series also received more angular headlights that give the front end an angry look in combination with the bigger grille. The blue tinge to the lamps indicates that these use BMW's Laserlight illumination.

BMW appears to have a few different front fascia designs on the way for the refreshed 7er. The one in this photo is simple and elegant by featuring a relatively skinny central opening that leads to tiny slits in each corner. The whole thing has a chrome trim surround to add a little shine.

We have seen a camouflaged version of this design in spy shots. However, there's also a sporty variant (see gallery above) that features much larger inlets in the corners.

BMW's engineers must retune the 7 Series' petrol-fuelled engines to comply with Europe's Worldwide Harmonised Light Vehicle Test Procedure. While the engines' displacement won't change, power outputs will likely be different. There will also be a plug-in hybrid 745e with a longer electric driving range than the current 740e.

BMW reportedly plans to begin production of the revised 7 Series in March. This points to an online debut soon and a public premiere at the Geneva Motor Show in March. Sales would begin as soon as the late spring in Europe, but Americans would need to wait until the second half of 2019 for the revised saloon to show up in dealers.