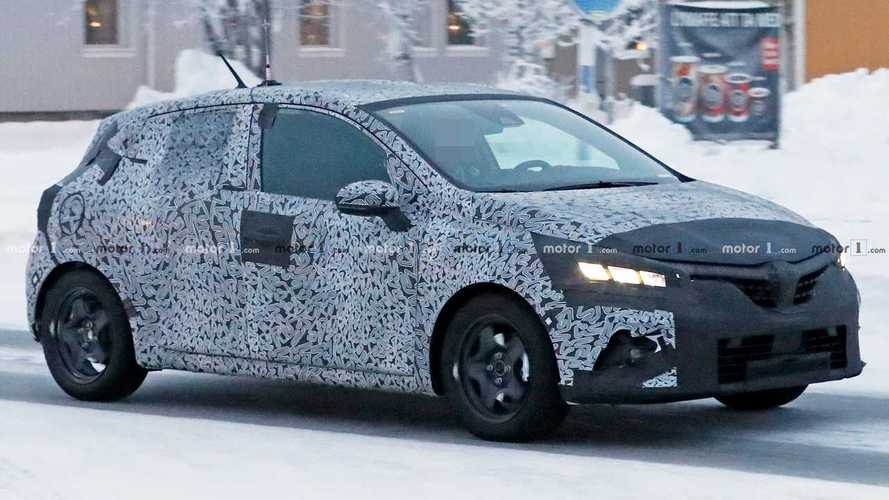 The new Renault Clio could debut as soon as the 2019 Geneva Motor Show in March.

Development of the next-gen Renault Clio is now in the cold-weather testing phase in Sweden, and the upcoming hatchback strips off a little camouflage as part of this move to a fresh evaluation location. We expect the new Clio to strip off all its camo for an unveiling later in 2019, possibly as soon at the Geneva Motor Show in March.

Previous Clio test mules have had blocky sections beneath the camouflage as a way to further disguise the new shape, but this one has lost most of those pieces. However, it continues to wear a concealing wrap over the entire body, in addition to black tape for an extra disguise. The camo can't hide that the Clio continues to be a five-door hatchback, and there's still a hidden door handle in the C-pillar for opening the rear doors. While not easily visible here, the latest generation reportedly features design elements from the Megane.

Check out these other looks at the Renault Clio:

2019 Renault Clio refuses to take some of the camo off

On the inside, the new Clio reportedly features a large, portrait-oriented touchscreen on the centre stack that replaces many of the traditional buttons. The material quality is allegedly quite a bit better in the cabin, too. Available advanced driver assistance systems will allow for semi-autonomous motoring.

The next-gen Clio will share the CMF-B platform with the Nissan Micra. The base engine will be a turbocharged 1.0-litre petrol-fuelled engine, but buyers will be able to upgrade to the 1.3-litre mill from the Mercedes-Benz A- and B-Class. A 1.5-litre diesel will also be available. A mild hybrid and plug-in will join the powertrain range later. Plus. a fresh take on the Clio RS will satiate Renault's performance-hungry fans.