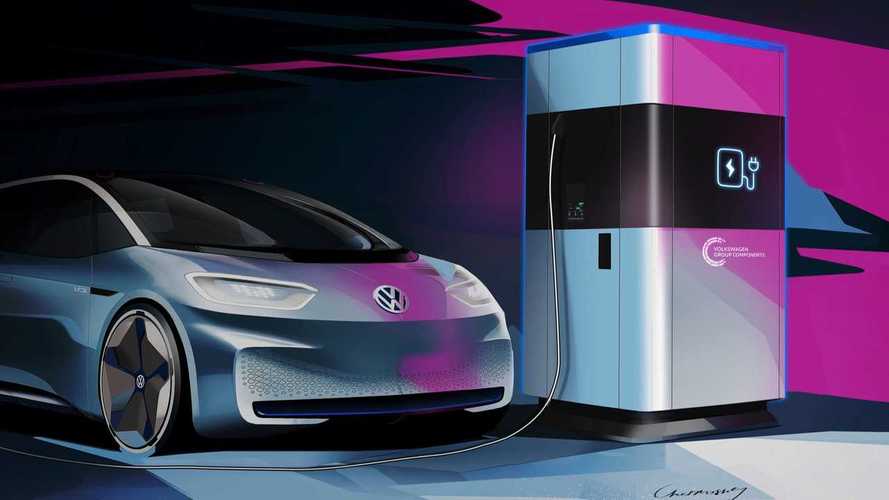 New boxes will be trialled in Wolfsburg, Germany.

Volkswagen has previewed its mobile electric vehicle charging station, which it says will be able to operate anywhere.

According to the German company, the boxy units could be used as temporary charging points at large-scale events, to help authorities plan the location of new charging points or as flexible solutions for office car parks.

The system works much like a power bank for a mobile phone, with the charging units containing their own huge batteries.

VW claims each unit is capable of charging up to 15 electric cars, and when the integrated battery level drops below 20 percent, the unit can simply be replaced with another, fully charged box.

However, the system can also be plugged into a power supply, in which case the unit will keep itself topped up.

And VW says it can plug the units into power sources such as solar panels and wind turbines, which would allow motorists to use even more environmentally friendly energy.

Thomas Schmall, chairman of the board of management of Volkswagen Group Components, said the system was a game-changer for charging infrastructure.

“The mobile charging stations are a decisive step toward an efficient network of charging points,” he said. “They can be set up anywhere as required – with or without connection to the power supply.

“This flexibility enables a completely new approach for the rapid expansion of the charging infrastructure. Cities can, for example, find out the most suitable places for a permanent charging point before making major investments in developing the network.

“In addition, it will be possible to set up a large number of charging stations temporarily – exactly when and where they are needed.”

The first boxes will be produced this year as part of a pilot scheme in Volkswagen’s home town of Wolfsburg, where they will support the city’s infrastructure expansion.

VW says the boxes could be dotted around the city, with customers able to find them using a smartphone app. Rapid charging technology housed in the units means charging the current-generation e-Golf to 80 percent would take around 17 minutes.

“Our mobile charging stations offer a further crucial advantage,” said Mark Möller, head of technical development at Volkswagen Group Components. “It is only when an electric car is charged with sustainably generated power that it can claim CO2-neutral mobility. Our charging station is the first to offer the possibility of temporarily storing sustainably generated power.”