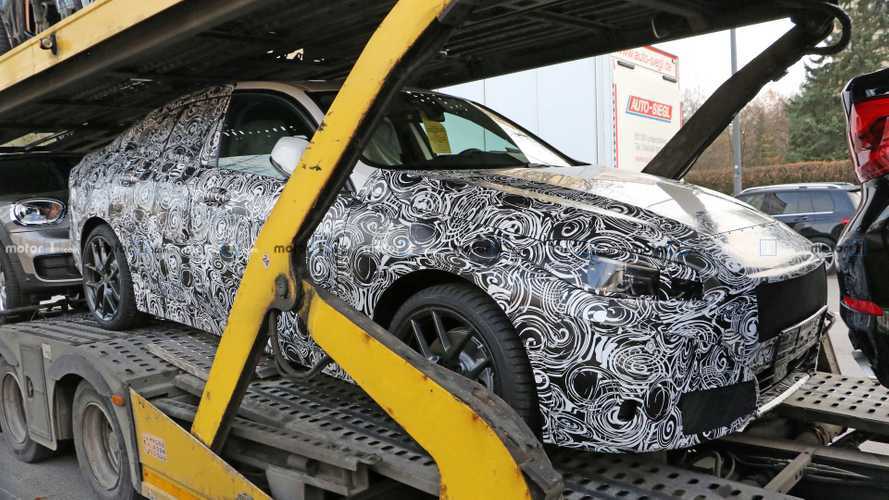 There's a yellow label hanging from the rearview mirror reminding test drivers not to exceed 5 mph.

After launching the X7 as its flagship SUV, BMW is working on a new entry-level saloon to slot below the 3 Series. Technically, the German automaker already has such an offering with the 1 Series Saloon, but it’s only available in China and Mexico whereas the 2 Series Gran Coupe is set to become a global model. We’ve now spotted a new prototype resting on a car carrier in the company of other BMWs as well as a Mini.

While the test vehicle did seem to have all of the production body panels in place, there were extra pieces of camouflage held in place by rivets to better conceal the swoopy saloon’s real metal. Nevertheless, the disguise applied by BMW doesn’t appear to be thick, so we have a pretty clear understanding of the car’s shape and proportions. Our spies were also able to have a look underneath the vehicle to reveal the prototype’s front-wheel-drive basis, with no visible driveshaft linked to the rear axle.

Upper-spec models are expected to feature an xDrive setup, including the rumoured M Performance version possibly called M235i with more than 300 bhp on tap using the same 2.0-litre turbo engine as the X2 M35i. According to the latest intel from our friends at BMW Blog, all flavours of the 4.5-metre car will come in the M Sport configuration with 18-inch wheels, stiffer suspension setup, upgraded brakes, and sports seats. They also have it on good authority an electrified M Performance version will combine a 252-bhp combustion engine with an electric motor good for an extra 87 bhp.

Riding on the same FWD platform as the next-generation 1 Series, the smallest Gran Coupe in BMW’s portfolio will command a premium over the equivalent five-door hatchback in the same vein as a 4 Series GC is more expensive than a 3 Series Saloon.

Internally codenamed F44, the 2 Series Gran Coupe is expected to premiere sometime this year to go up against the second-generation Mercedes CLA debuting next week at CES in Las Vegas. Production of the new GC will allegedly kick off as early as June.

The smallest Gran Coupe is coming...