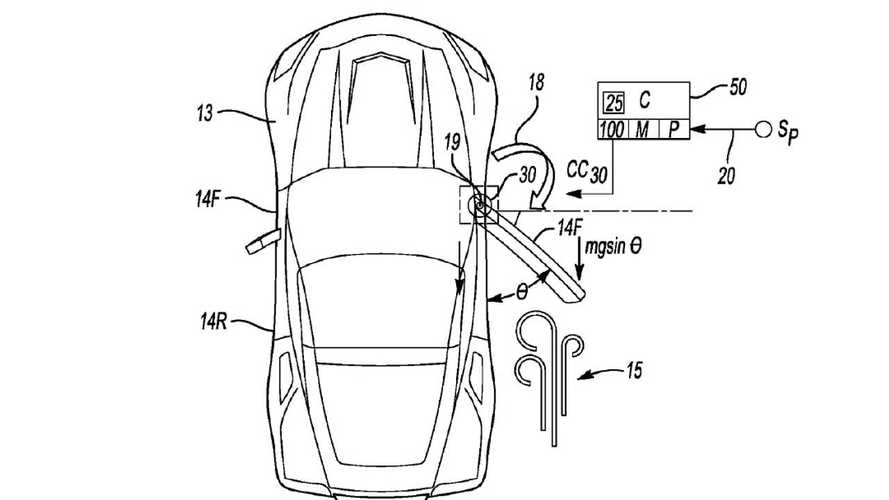 Could this be part of the alleged electrical woes with the mid-engined 'Vette?

General Motors has a new patent application for powered doors that open and close at the push of a button. That by itself isn’t extraordinary, or even new for that matter. There are two things that make this particular patent interesting, however. The powered doors would be able to adjust force to compensate for wind or gravity when parked on slopes. Also, the vehicle used to depict the doors looks a lot like the Chevrolet Corvette.

See mid-engined Corvette up close in this spy video

We need to give a shout out to our friends at MidEngineCorvetteForum.com for bringing this to our attention. The patent application was filed in June 2017 with the U.S. Patent and Trademark Office but it was just published today, so this is fresh-and-new stuff. Among all the highbrow techno-speak that makes up such patents is the specific mention of a rotary actuator, position sensor, and a controller. Instead of having a simple motor to open and close the door, these devices would work in conjunction to sense forces acting on the door – such as strong winds – and adjust power to compensate. The system would also detect obstructions to the door.

The image GM included with the patent application clearly shows a Chevrolet Corvette, but it resembles the current C7 model. It’s possible the car’s likeness is simply a placeholder for this application; such a feature seems more fitting for a larger SUV or snazzy luxury car. It’s also possible that GM is working on this option for the mid-engined Corvette, which we know will be sold alongside the current generation for at least a little while. It fits into the recent narrative we’ve heard about the car’s launch being delayed over electrical issues, not to mention an upscale grand touring Corvette that could be offered further down the road.

We initially thought Chevrolet would reveal the new C8 Corvette next month at the North American International Auto Show in Detroit. We then heard that New York was slated to be the mid-engined ‘Vette’s debut, but with the alleged electrical issues apparently mucking up the works, all bets are currently off as to when it will become official.