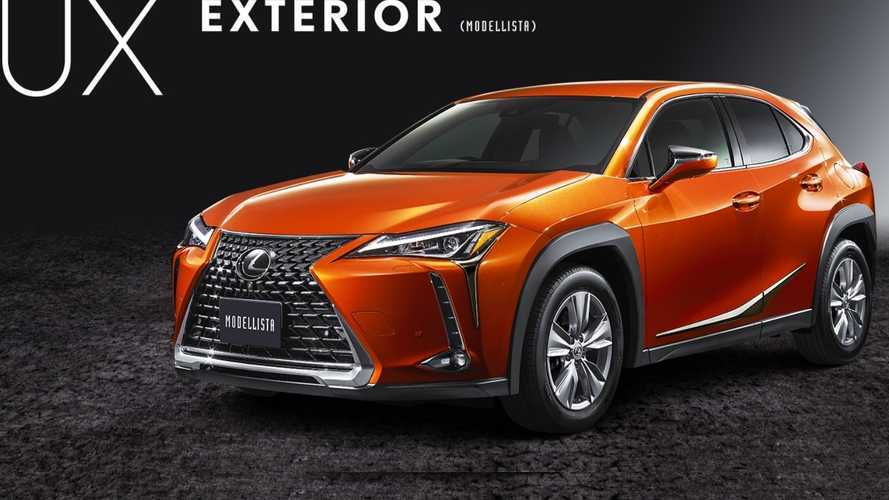 Get these accessories if you want your UX to stand out from all the others.

History has taught us that Modellista doesn’t do subtle, and the same goes for this upgrade package tailored to the new Lexus UX. The compact crossover was unveiled earlier this year and already is getting a radical makeover for those who want to be the centre of attention all the time. As shown in the adjacent image gallery, multiple accessories are available for both the regular version as well as for the more aggressive F Sport model.

Perfectly reflecting the JDM tuning scene, the UX in F Sport flavour has received a sporty body kit with a prominent front spoiler that sticks out from the bumper. Above the grille is a bonnet garnish we don’t get to see so often, while the side profile now hosts beefy skirts to make Lexus’ smallest crossover more muscular. To achieve the same result, the back of the UX has a new skirt and an aero garnish to the sides of the roof-mounted rear spoiler.

As far as the regular UX is concerned, it’s all about minor trinkets such as the jet black garnishes applied onto the headlights and taillights as well as on the lower section of the doors.

These parts are already available in Japan and can be optionally painted to match the colour of the vehicle, which is obviously most customers will do. We wouldn’t hold our breath on available outside the Land of the Rising Sun as there’s a good chance these accessories will remain a JDM affair. Modellista will have these items on display in January 2019 at the Tokyo Auto Salon.

For something more aggressive straight from Lexus, the company isn’t ruling out the idea of a fully fledged F model. However, the UX F hasn’t been approved for production yet, and if it will, it’s going to be a hybrid.

Get acquainted with the new Lexus UX: