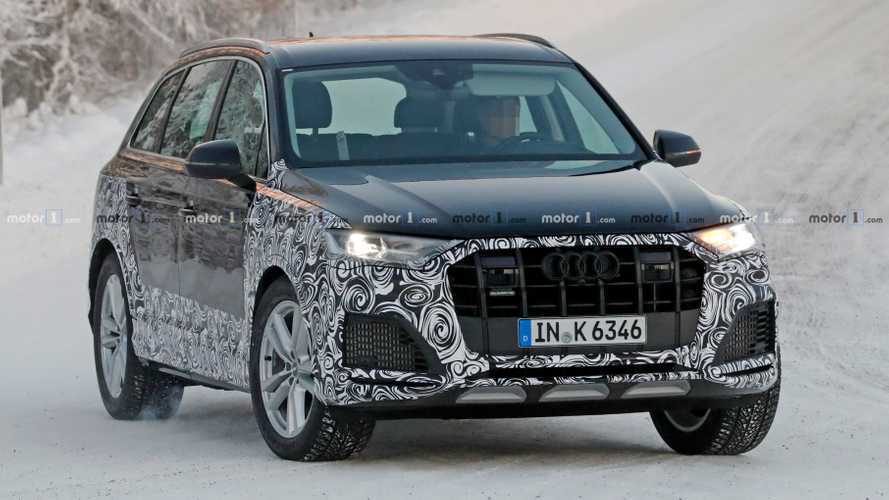 Cold weather testing is in full swing for these three-row people movers.

The big Audi Q8 is the company’s flagship people mover, but the Q7 is still a noteworthy machine. That’s especially true in the current SUV-crazy climate, and Audi is prepping a facelift for the 2020 model year. We’ve seen the Q7 and high-performance SQ7 out before, but this time our spy photographers unleashed the shutters for no less than 46 photos.

Obviously the facelift isn’t too extreme, but the Q7 will have an all-new face with reworked headlights and a grille that appears to shrink just a tad from the current model. The look borrows from the larger Q8, and there are more changes around back with a new rear fascia featuring integrated exhaust tips.

The snazzy SQ7 receives similar treatment, albeit with a more aggressive grille and a meaner appearance overall. The taillights are freshened up, and the posh exhaust cutouts on the standard model are replaced with oval outlets. We don’t yet have information on power for the SQ7 – it should be brisk but with Audi and Lamborghini under the same VW umbrella, it’s not likely to be off-the-rails insane.

Inside, both variants should see some significant upgrades with the dual-screen setup borrowed from the Q8. The latest features and advancements in driver-assist tech should also befall the three-row SUV, though finding specific information still remains elusive. Same goes for power plants, though current thought is that present-day options will likely carry over, possibly with a bit more power to help set the new model apart.

We don’t have a definitive reveal date for the refreshed SUV, but given the thin camouflage it shouldn’t be too far away. The new Q7 should be available for the 2020 model year which places a reveal date likely in the first half of 2019, possibly in March at the Geneva Motor Show.