BMW M5 Competition Austin Yellow is as flashy as a supercar 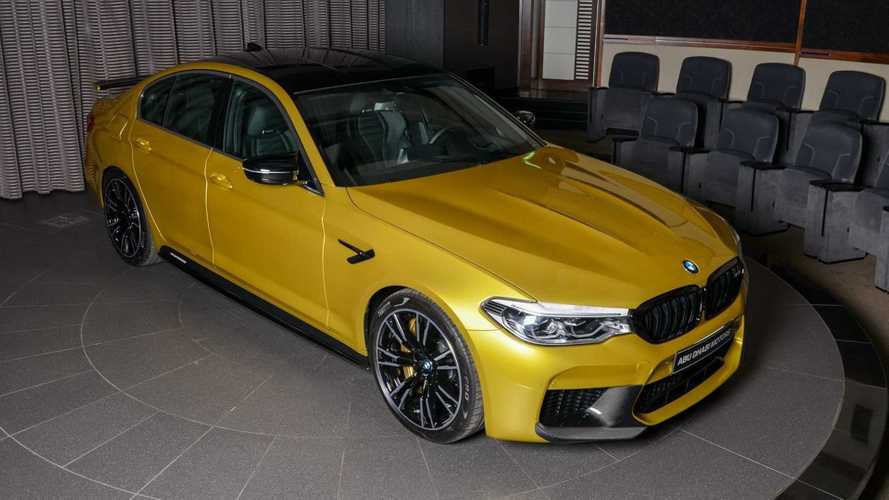 Come to think of it, this is a supercar disguised as a four-door sedan.

Many people would be more than happy to park even the standard BMW 520i in their garages, but for those hard to please, the M5 should tick all the right boxes. Still not enough? Enter M5 Competition. As it turns out, it looks like there are even more ways to spice up the midsize luxury sedan from Bavaria, such as painting the body in a look-at-me Austin Yellow Metallic shade from the BMW Individual catalogue.

Currently residing at the famous BMW Abu Dhabi Motors dealership in the UAE, the fully loaded M5 Competition is equipped with a couple of aftermarket goodies. A carbon fibre rear wing from AC Schnitzer has been installed on the trunk lid for a greater visual impact and probably some aero gains. The upper section has a bare carbon fibre look while the end plates, the base, and the lower section are painted to match the body.

The menacing quad exhaust tips are still there, but these now belong to a custom Akrapovic system with carbon finishers flanking the diffuser. The soundtrack generated by the twin-turbo 4.4-litre V8 engine is probably even more alluring than the one delivered by the standard setup, which we all know is far from being bland.

The new M5 Competiton is awesome:

Visual upgrades aside, let’s keep in mind the newly launched Competition is the most hardcore M5 ever built by BMW. With 617 bhp on tap, it’s also the most powerful road car ever produced by the Bavarians, eclipsing even the mighty V12-engined M760i.