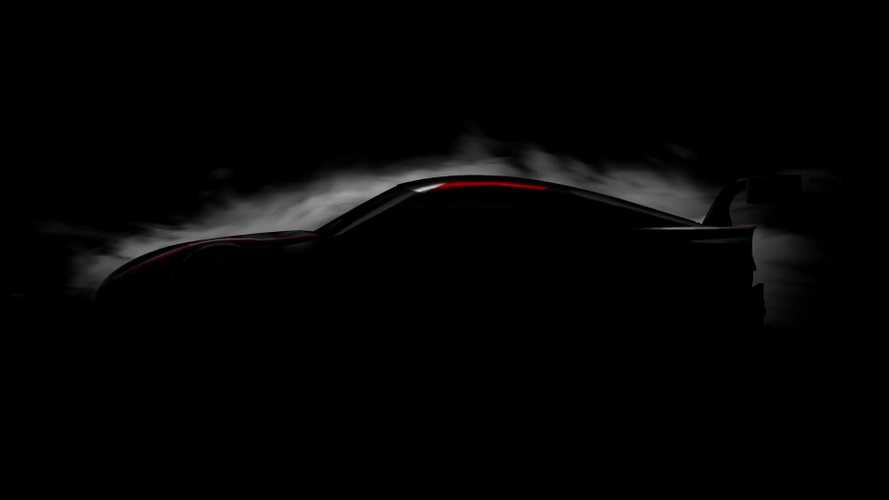 The Super GT-spec Supra will premiere next month at the 2019 Tokyo Auto Salon.

Toyota brought back to life the legendary “Supra” moniker in March at the Geneva Motor Show where it unveiled the GR Supra Racing Concept. It looks like the Japanese marque isn’t quite done yet with exploring the sports coupe’s racing side as another concept for a track-only machine has been developed. It goes by the full name of GR Supra Super GT Concept and we’ll check it out in the metal in roughly a month from now at the 2019 Tokyo Auto Salon in Japan.

There’s not much to see in the adjacent shadowy teaser image released today by Toyota, but we do notice the large rear wing and a massive diffuser sticking out like you’d come to expect from a Super GT-spec beast. The race car should look substantially more aggressive than the previous concept and could serve as a sneak preview for a future Super GT entry.

We are counting the days left until the Supra's official debut:

Besides these two Supra-based race cars, let’s keep in mind Toyota is working on a fully fledged hypercar previewed by the GR Super Sport Concept. Aside from coming out with a road-legal version, the company is expected to enter the high-powered machine at Le Mans as early as 2020.

Meanwhile, the fifth-generation Supra will (finally!) premiere in the first half of January 2019 at the North American International Auto Show in Detroit. Its race car counterpart, the GR Supra Super GT concept, will be on display in the Land of the Rising Sun at the Tokyo Auto Salon on January 11 for the press and on January 12 and 13 for the public.

The GT-spec Supra will share the spotlight with the TS050 Hybrid, Yaris WRC, and the Nurburgring-spec LC – all of which are set to compete in 2019. Also on display will be a Supra that took part in a series of races at home in Japan.

TOYOTA GAZOO Racing will exhibit at the Tokyo Auto Salon 2019, a customized car event to be held at Makuhari Messe in Chiba Prefecture, Japan for three days from January 11 to 13*, 2019.

TOYOTA GAZOO Racing aims through its motorsports activities to develop its cars and people with the goal of "making ever-better cars." It participates in top category races including the FIA World Rally Championship (WRC) and FIA World Endurance Championship (WEC), as well as national rallies and races. The technologies and know-how it acquires through these activities are subsequently fed back into the development of new production vehicles.

TOYOTA GAZOO Racing selected "from past to future" as the theme for Tokyo Auto Salon 2019 and will feature our challenges.

Exhibition vehicles include the Yaris WRC, the TS050 Hybrid, and the 2019 Lexus LC Nürburgring-spec, all of which will compete in top-level races next year. A Supra vehicle that participated in past domestic races and the GR Supra Super GT Concept will also go on display.

Further information regarding exhibition vehicles and the booth is available at the official TOYOTA GAZOO Racing website.