The upcoming SSC Tuatara finally shows what it's got in the flesh.

The last time we heard any news about the SSC Tuatara, a video of its 5.9-litre twin-turbocharged engine was shown being bench tested on a dyno. Ever since its debut at Pebble Beach earlier this year, the company’s hypercar has yet to be seen being driven on public roads. That is, until SSC uploaded a short 10-second video clip of the Tuatara being tested with an Ultimate Aero XT, the latest iteration of the company’s first car to hit 250 miles per hour and dethrone the Bugatti Veyron as fastest car in the world, acting as the camera car.

More info on the Tuatara: 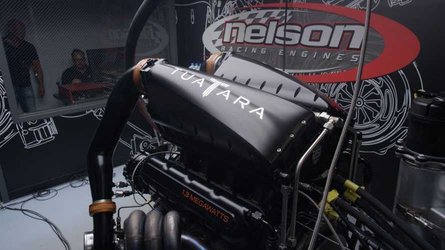 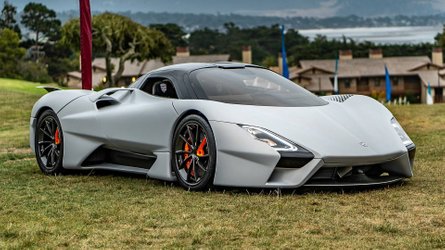 It’s hard to tell exactly where SCC was testing the Tuatara, but there is definitely a long stretch of road seen in the clip. As short as the video is, the Tutuara is able to show off its tremendous acceleration while gunning past the Ultimate Aero XT. With 1,750 bhp on tap when filled with E85, the Tuatara can go from 0-60 mph in a blistering 2.5 seconds. At full chat, it will also do the quarter-mile in only 9.75 seconds.

With the original Ultimate Aero being dethroned by the Veyron Super Sport, the plan was to take it to the next level. Being that the Koenigsegg Agera RS is the current fastest car in the world, all other supercar makers are not only setting their sights on beating it, but to hit the holy grail: 300 mph.

With nearly 600 more bhp than the Agera RS, the Tuatara has a real shot at being among the few cars that can inch anywhere close to that mark. Based on this video, it definitely looks like development is going well, so we’ll just have to wait and see when the Tuatara will make it’s official top speed run.