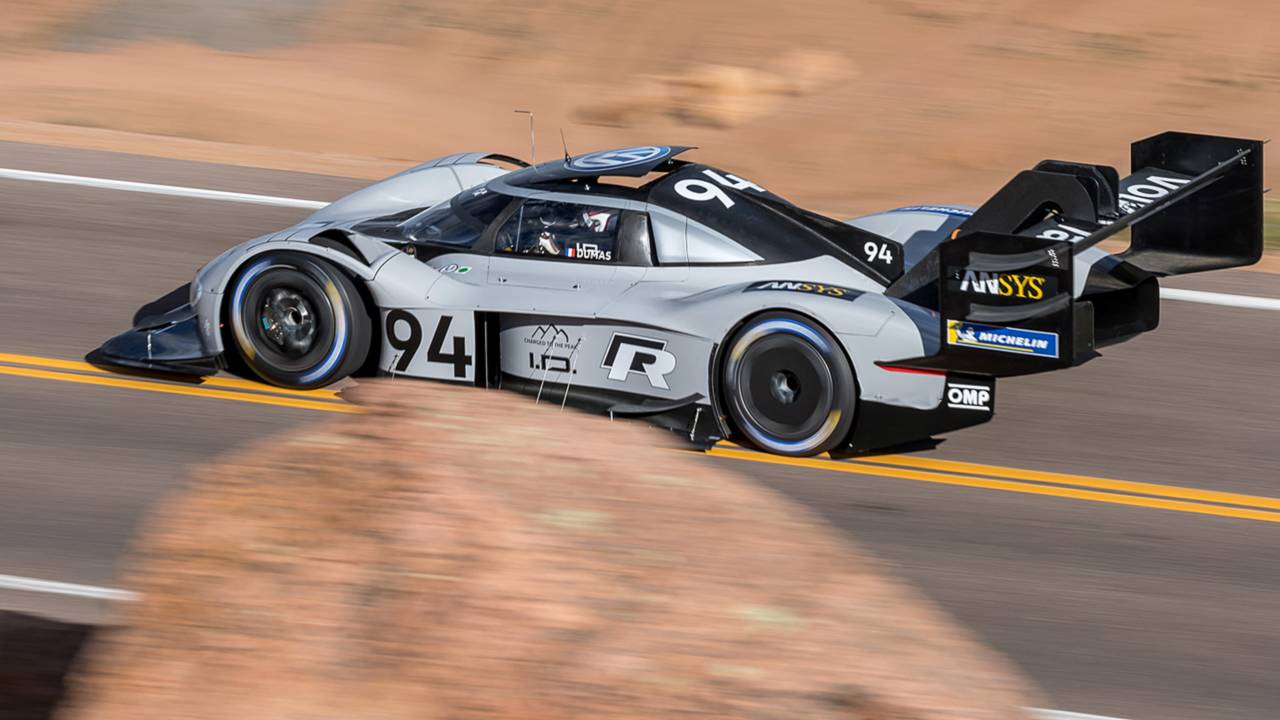 The Pikes Peak-beating I.D. R could be about to claim another scalp.

Volkswagen's I.D. R may not be returning to Pikes Peak, but the impressive electric racer might be gearing up for another iconic challenge.

See how VW got the I.D. R Pikes Peak up the mountain in record time
⠀

Sources have told Autocar that Volkswagen could be aiming to take the electric lap record at the Nürburgring with the car. The wider Volkswagen Group took the overall lap record at the Green Hell earlier this year with the Porsche 919 Evo in just 5 minutes 19.55, and has the production car record as well with the Lamborghini Aventador LP770-4 SVJ (6 minutes 44.97 seconds).

In fact, the Volkswagen Group has the four fastest production car times at the Nürburgring, but it doesn't have the battery-powered benchmark, which is currently held by the Nio EP9. The Chinese all-electric hypercar lapped the German track in 6 minutes 45.9 seconds last year, but in simulations Volkswagen has reportedly found out that the I.D. R could easily better that time.

"There’s more to come, we’re sure," a source told the British publication.

Volkswagen would need to tweak the I.D. R in order to beat the record though. Aerodynamic modifications would be needed to adapt the car from hillclimb beater to circuit slayer.

The drive system may also be tweaked – for its Pikes Peak run the car's twin-motor, all-wheel-drive setup developed 670 bhp and 480 lb-ft of torque. Power comes from two interlinked and integrated lithium-ion battery packs which sit either side of the cockpit – that's one element of the car that will almost definitely remain unchanged. In hillclimb trim the I.D. R can already launch from 0-60 mph in just 2.25 seconds an onto a top speed of 150 mph.

Because of its all electric drivetrain, the car is relatively heavy – for a racing car, anyway. It tips the scales at just under 1100 kg, but that clearly hasn't held it back. As well as it's Pikes Peak record, the I.D. R also topped the charts during the hillclimb shootout at this year's Goodwood Festival of Speed. For both of those winning runs, former Porsche Le Mans driver Romain Dumas was behind the wheel.

Should Volkswagen opt to take on the all-electric Nürburgring lap record, it'll likely take up the challenge in May. Autocar's source has reportedly revealed that the German manufacturer has already booked the facility for a period in May of next year. We eagerly await an attempt.