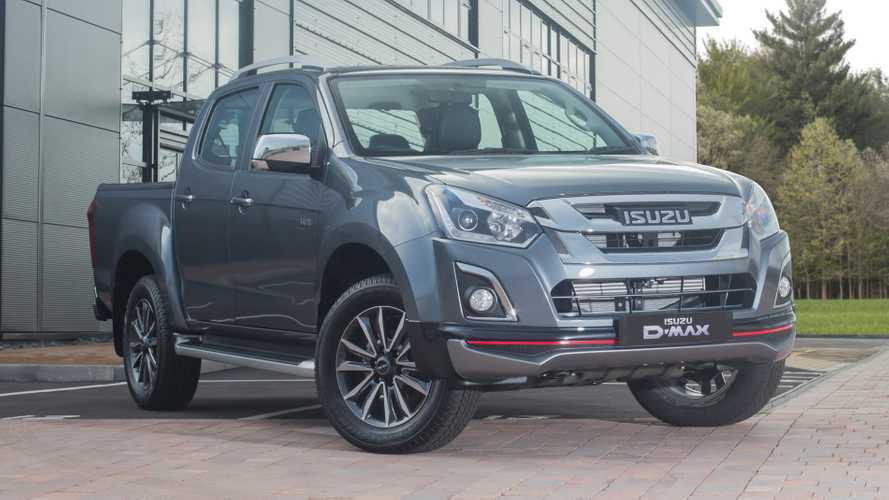 Isuzu has revealed a new limited-edition version of its D-Max pick-up truck called the Utah V-Cross.

With just 100 vehicles set to be built, the high-spec model is based on the mid-range Utah model, but features styling and convenience improvements.

The standard Utah (below) gets leather upholstery, a reversing camera and a seven-inch touchscreen multimedia system with satellite navigation. Climate control and heated front seats are thrown in too, along with rear parking sensors and keyless push-button start.

In addition, the Utah gets roof rails, alloy wheels and chrome trim on the grille and door mirrors.

However, the V-Cross model adds to this with a new front skirt that boasts a red pinstripe, as well as gloss black touches, and 18-inch model-specific two-tone alloy wheels.

Inside, meanwhile, the V-Cross gets wireless phone charging in the top glove box, as well as a front-facing camera that provides a view of the area normally invisible to the driver. Displayed on the central touchscreen, the camera’s output can be used for parking or off-roading.

Both manual and automatic versions of the V-Cross will be offered, but customers wanting the six-speed auto will pay another £1,000 plus VAT for the privilege.

Opting for the automatic will also affect the car’s performance and economy, adding 0.3 seconds to the 0-62 mph time and, more importantly, cutting the fuel economy from 40.4 mpg to 36.2 mpg. The carbon dioxide emissions suffer, too, and although that won’t affect company car tax or vehicle excise duty (VED, or road tax) the increase from 183 g per kilometre to 205 g per kilometre might be a drawback for any environmentally conscious buyers.

Those buying the manual model will save money, too. The six-speed stick-shift version starts at £26,199 plus VAT – a neat £500 more than the normal Utah – while the automatic comes in at £27,199 plus VAT.

For private buyers or those who aren’t VAT registered, however, the truck will cost more than £31,000.

The V-Cross will be offered in the full range of Isuzu D-Max colours, but Isuzu says it “recommends” Sapphire Blue, Galena Grey or Cosmic Black Mica to provide a “particularly strong aesthetic”.