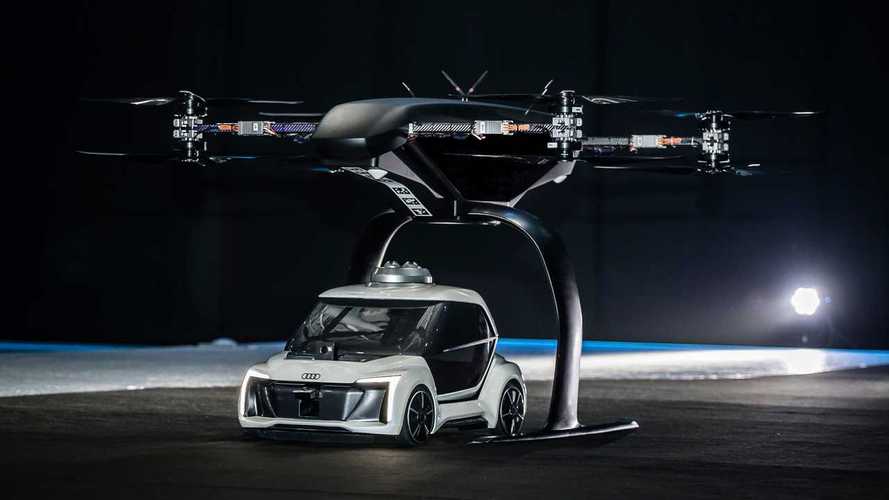 It was a quarter-scale model, but still, it flew and drove by itself.

Audi hasn’t given up on its driverless Pop.Up Next flying taxi concept just yet. In fact, the German automaker just completed a successful test of the modular system, which uses a quadcopter to carry a small two-passenger electric vehicle through the air. Once on the ground, the quadcopter detaches the car which then autonomously carries passengers to their destination. There is a slight catch, however – the test was carried out using a 1:4 scale model of the system, so it’s not quite the real deal just yet.

Audi is working on this futuristic project with partners Airbus and Italdesign, and as you can see from the links above, it’s making steady progress. This recent quarter-scale test took place at Drone Week in Amsterdam, and it is rather significant as a proof-of-concept. Up to this point we’ve only seen concepts and interpretations of the various components and how it all fits up. The flight module is basically a quadcopter with provisions to carry the ground module, better known to us as a car. The model flew as advertised, placing the car on the ground and releasing it. Free from the quadcopter, the small electric car drove autonomously from the testing grounds.

There’s obviously still much work to do, and not just in creating an electric car carried around town by a quadcopter. Autopilot controls in aircraft are commonplace, but dialling in the systems for cars is still a work-in-progress. Add the complexity of the two modules operating together in a three-axis environment and it gets even more complicated.

Still, Audi seems fairly confident that autonomous flying taxis are the future for personal mobility in cities. Previously, Audi said such a system could go live in as little as 10 years, but this time around there aren’t any estimates as to when Pop.Up Next might lead to production versions. We suspect that will depend on how well a full-size prototype performs, which Audi says is the next step in the process.

At Drone Week in Amsterdam Audi, Airbus and Italdesign are presenting for the first time a flying and driving prototype of “Pop.Up Next”.
This innovative concept for a flying taxi combines a self-driving electric car with a passenger drone. In the first public test flight, the flight module accurately placed a passenger capsule on the ground module, which then drove from the test grounds autonomously. This is still a 1:4 scale model. But as soon as the coming decade, Audi customers could use a convenient and efficient flying taxi service in large cities – in multi-modal operation, in the air and on the road. Without changing vehicles, passengers will enjoy their leisure time, relax, or work.

“Flying taxis are on the way. We at Audi are convinced of that,” says Dr. Bernd Martens, Audi board member for sourcing and IT, and president of the Audi subsidiary Italdesign. “More and more people are moving to cities. And more and more people will be mobile thanks to automation. In future senior citizens, children, and people without a driver’s license will want to use convenient robot taxis. If we succeed in making a smart allocation of traffic between roads and airspace, people and cities can benefit in equal measure.”

To see what an on-demand service of this kind could be like, Audi is conducting tests in South America in cooperation with the Airbus subsidiary Voom. Customers book helicopter flights in Mexico City or Sao Paulo, while an Audi is at the ready for the journey to or from the landing site. “Services like this help us to understand our customers’ needs better. Because in the future, flying taxis will appeal to a wide range of city dwellers. With Pop.Up Next we are simultaneously exploring the boundaries of what is technically possible. The next step is for a full-size prototype to fly and drive,” said Dr. Martens.

Audi is also supporting the Urban Air Mobility flying taxi project in Ingolstadt. This initiative is preparing test operations for a flying taxi at Audi’s site, and is part of a joint project of the European Union in the framework of the marketplace for the European Innovation Partnership on Smart Cities and Communities. This project aims to convince the public of the benefits of the new technology and answer questions concerning battery technology, regulation, certification, and infrastructure.