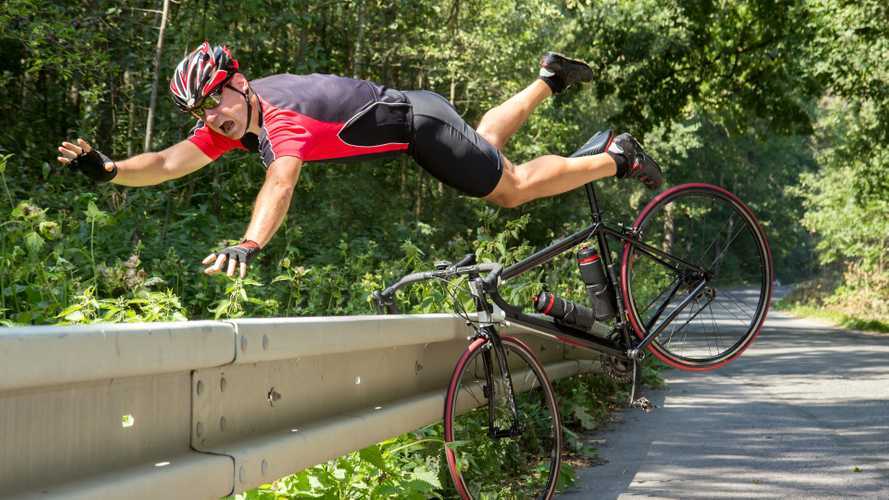 Both cyclists and motorcyclists are at risk from the nation's torn tarmac.

Crashes involving potholes and poor road surfaces are three times as likely to involve bikers and cyclists as any other kind of accident, according to new data.

Analysis of government figures by the AA found that pothole-related accidents resulting in injuries were far more likely to involve a cyclist or biker than any other kind of crash.

In 2017, 545 vehicles were involved in injury crashes where the road surface was a contributory factor. Nearly half of those vehicles (45 percent) were bicycles or motorcycles.

However, when all kinds of accidents were looked at, the data revealed that these modes of transported were involved in just 15 percent of crashes.

Overall, the AA says the casualty rate for cyclists and bikers is around 25 times higher than for car occupants.

The news comes during the national Road Safety Week, which is this year focussing on the safety issues surrounding two-wheeled vehicles.

Earlier this week, a study from Brake, which organised the week-long campaign, found that bikers and cyclists were 34 times more likely than car drivers to be killed on UK roads.

As a result of its findings, the AA has called for improvements to be made to road surfaces, which it says are potentially damaging for all road users.

According to the organisation, potholes cause damage to cars, but they are a greater threat to cyclists and bikers, causing falls or sudden movements that might put the rider at risk.

Earlier AA research found that more than half of drivers have seen a cyclist swerve suddenly to avoid a pothole, putting themselves and others at risk of an accident.

The government has put extra funding in place for pothole repairs, including a £420 million fund announced in the autumn budget, but the authorities’ efforts have been described as a “drop in the ocean”.

A report published earlier in the year by the Asphalt Industry Alliance found that the one-time bill for fixing all the nation’s potholes would run to more than £9 billion. Carrying out the repairs, meanwhile, would take 14 years.

Edmund King, Director of the AA Trust, said drivers and riders alike deserved a network capable of keeping them safe.

“Potholes are a plague on the roads for all road users – not just drivers,” he said. “They create a particular danger to those on two wheels, as is shown by the crash figures. If a cyclist hits a pothole they can suffer serious injury from the fall, yet swerving into traffic is not an attractive alternative.

“All road users deserve a road network that is properly and safely surfaced and fit for purpose.”