Land Rover is about to take the wraps off the second-generation Evoque after having the original model on sale for about seven years. During this interval, more than 750,000 units of the posh crossover have been shipped all over the world, so it’s safe to say the baby Range Rover has been a tremendous commercial success for the Tata Motors-owned company.

The road to the official unveiling has been filled with numerous spy shots, with our original set published back in February 2017. Attached at the end of this text is the most recent batch of images depicting a near-production prototype with most of the final bits in place sending out a mini-Velar vibe on the outside.

Our spies have also been able to take a peek inside the cabin where the test vehicle combined an all-digital instrument cluster with a generous touchscreen mounted on the centre console. The controls for the HVAC system also appeared to be of the touch-sensitive variety in the same vein as they are on the aforementioned Velar.

Speaking of the cabin, the outgoing Evoque has been criticised for its cramped interior, but rumours say Land Rover has addressed this issue by elongating the wheelbase and increasing the track widths. In addition, it is believed the rear suspension setup has been tweaked to improve the amount of space available for rear passengers. We’re not expecting the three-door model to make a comeback since demand has been low for the first Evoque, while the availability of a new convertible is uncertain at the time being.

See the new Evoque during the testing phase: 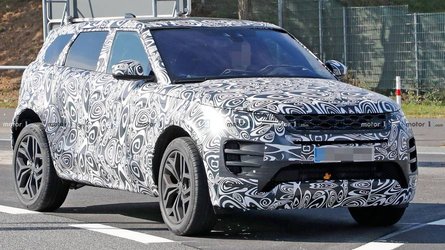 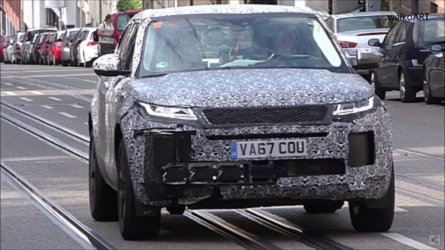 Even though it will replace a seven-year-old car, the second-generation Evoque won’t be an all-new development according to the latest reports. Nevertheless, some significant changes are in tow for the Volvo XC40 rival as aside from the roomier interior and the evolutionary styling, a mild hybrid setup is expected. It will allegedly combine a turbocharged three-cylinder 1.5-litre engine with a small electric motor and a 48V electrical architecture responsible with powering the ancillaries. There also might be a diesel-electric hybrid, but availability will greatly vary from market to market. JLR’s latest crop of Ingenium petrol and diesel engines is expected.

Following its online reveal today at an event starting at 19:45 GMT / 14:45 EST, the 2020 Land Rover Range Rover Evoque will celebrate its public debut at the Los Angeles Auto Show next week and will go on sale in 2019.