Remember when a Tesla Model X smoked three high-powered SUVs on a drag strip last week? Apparently, one of the contenders of that race, the one driving the turquoise-chrome-wrapped Lamborghini Urus, wanted a rematch. Yianni Charalambous of Yiannimize – a vehicle wrapping shop in London – wants to pit his similarly-wrapped Aventador S against the Tesla Model X, and he wanted to make sure he'd win this time.

But could he reverse the previous results with his other attention-grabbing supercar? 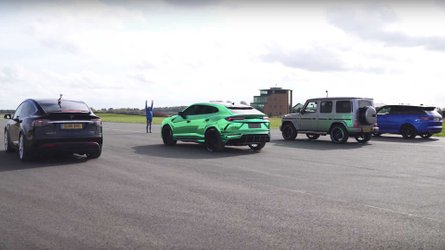 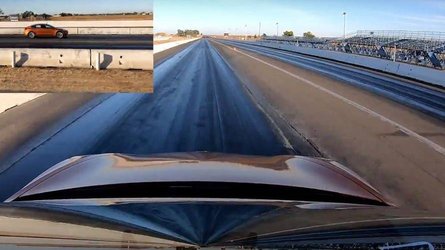 The Tesla Model X in its P100D performance version could produce up to 772 bhp coming from its two electric motors that power both axles. Armed with instantaneous torque delivery that EVs are known for, the electric SUV catapults from standstill to 60 miles per hour in just 2.9 seconds. Its 100 kiloWatt-hour battery weighs a lot, though, bringing the Tesla to 2,509 kilograms of curb weight.

The Aventador S, on the other hand, houses a 6.5-litre V12 that produces 730 bhp, which is 39 bhp more than the standard Aventador. It also pulls the supercar with its 509 pound-feet of torque via its all-wheel-drive system. Its major leverage, however, is its curb weight that's around 450 kilograms lighter than the Tesla Model X. Now, is that weight difference significant? Oh yes, especially in a straight-line race.

Now, a bit of a spoiler here. The Aventador S was the clear winner on the standstill drag race. However, the rolling start race was a bit controversial as the Lambo seemed to outrun the Model X initially but at the rolling 30 mph race, the result was a bit obscure. Which do you think was the real winner here?