New Mazda3 spied on the road weeks before big debut 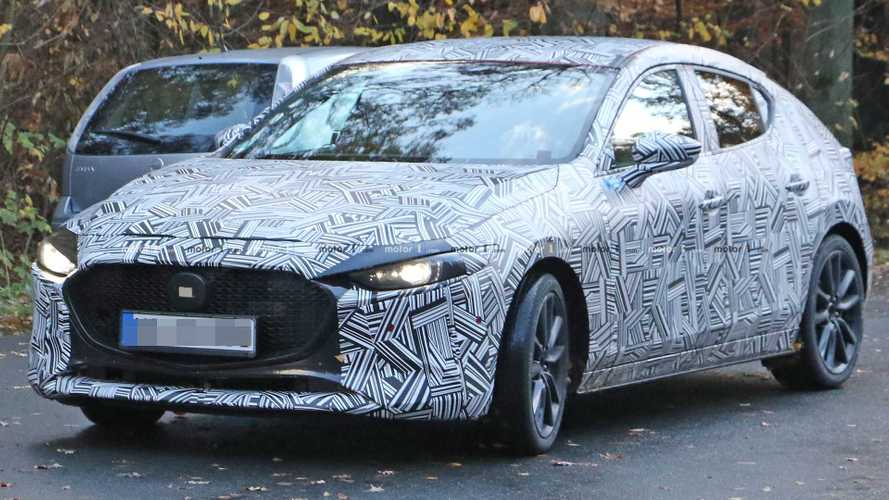 It looks like a stylish entry to take on vehicles like the Honda Civic and Toyota Corolla.

The new Mazda Mazda3 is nearing a debut in just a couple weeks at the Los Angeles Auto Show, but here are some spy shots of the sleek new hatchback to whet your appetite until we can see the real thing. There's even a look inside.

The new Mazda3 takes significant cues from the Kai Concept (gallery below). They share a downward sloping nose, although the production model seems to accentuate this slant even more. Sharp corners for the headlights give the front a pointy look, and there's quite a large grille. The roof has a gentle arch that incorporates into the tail, and these photos show that a large part of the hatch opens for access to the cargo area. In silhouette, the vehicle is quite sleek.

Inside, Mazda opts for minimalism. There's a simple three-pod instrument layout. The infotainment screen perches on top of the dashboard, and a photo here shows that it has touchscreen controls. Below the display, the designers mount a few other controls but appear to leave things largely unadorned.

Get excited for the new Mazda3:

Mazda teases something shapely – could it be the new Mazda3?

The new Mazda3 will be the company's first vehicle with its Skyactiv-X engine. The powerplant can use compression ignition similar to a diesel for igniting the fuel-air mixture without a spark plug. The incredibly high compression ratios that are necessary to make this happen results in better fuel economy and emissions. The company isn't discussing the engine's output, but previous statements indicate the 2.0-litre supercharged four-cylinder makes around 187 bhp and 169 pound-feet of torque. Fuel economy is allegedly about 43 mpg urban and 58 mpg motorway. This engine family would eventually arrive in other Mazda models.